Rajya Sabha Chairman M Venkaiah Naidu on Friday rejected notices under Rule 267 by some Opposition leaders seeking a discussion on municipal polls and legislation on the minimum support price (MSP). 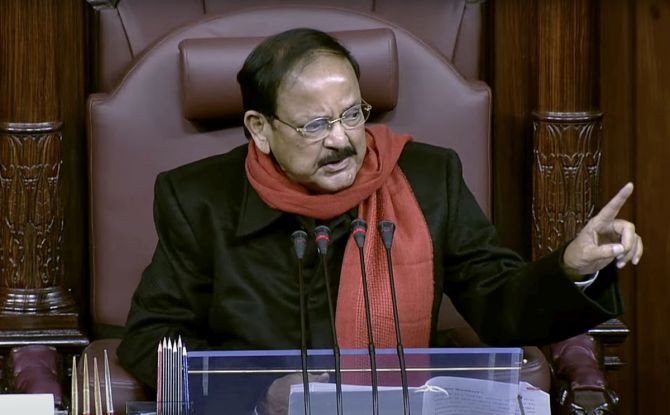 After papers were laid in the House, the Chair mentioned the notices.

Some members including Jairam Ramesh (Congress) and Manoj Kumar Jha (Rashtriya Janata Dal) had given a suspension of business notice under Rule 267 on the demand to discuss municipal elections, he said.

Deepender Singh Hooda (Congress) and V Sivadasan (Communist Party of India-Marxist) had also given notices under Rule 267 to discuss a legislation on MSP.

Rejecting these notices, the Chairman said, "I have not admitted (the notices) as there are other avenues to raise this matter in the House and some matters are local."

He said it was not possible to discuss municipal polls of one or the other state in the Upper House.

"Should we go on discussing local bodies here," he asked.