The situation in the border state of Nagaland, where protests and rioting broke out after firing by security forces claimed 14 civilian lives, remained tense but calm on Tuesday as the state cabinet met to demand the Centre repeal the Armed Forces Special Powers Act (AFSPA). 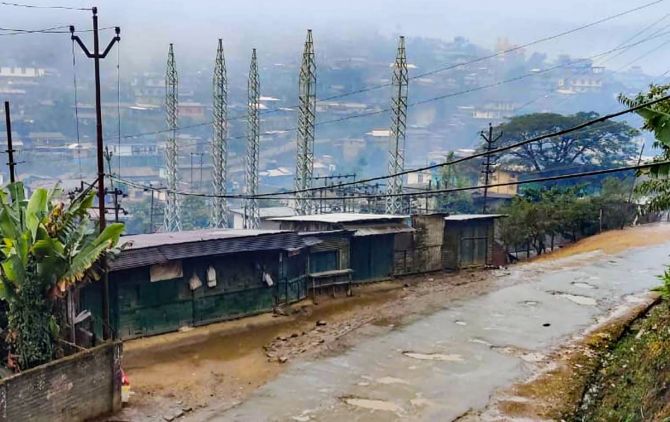 IMAGE: A deserted area during the Nagaland bandh called by some state organisations in Mon district, on Tuesday, December 7, 2021. Photograph: PTI Photo

Demand for repeal of the act found echoes in the nation's Parliament with National People's Party (NPP) MP Agatha Sangma, a former Minister in the United Progressive Alliance government, terming the act as 'the elephant in the room which (needs to) be addressed' and seeking the 'draconian' Act be repealed.

The AFSPA was enacted in 1958 to give armed forces far reaching powers of arrest and detention after an armed insurgency started in Nagaland.

Critics have maintained that the controversial law has failed to control insurgency despite giving armed forces powers to act with impunity, sometimes leading to human rights violations.

Sangma said the killing of 14 civilians in Nagaland, 'reminded all of the Malom massacre' in which over 10 civilians were shot dead in Imphal 'and prompted a 28-year-old Irom Sharmila to go on a 16 year-long hunger strike'.

The Nagaland cabinet which met in an emergency sitting under the leadership of Chief Minister Neiphiu Rio on Tuesday also called off the ongoing Hornbill Festival in protest against the killing, besides deciding to write to the central government on the repeal of the act, state ministers said.

The 10-day Hornbill Festival, the state's largest tourism extravaganza held at Naga Heritage Village in Kisama near the state capital, was scheduled to end on December 10.

During the meeting, the cabinet was briefed about the action taken after firing, including setting up of a Special Investigation Team (SIT) headed by an IGP rank officer and grant of ex gratia to the next of kin of the deceased by the state and central governments, ministers Neiba Kronu and Temjen Imna Along told reporters.

Rio on the sidelines of a function in Kohima on Tuesday told newspersons 'it will be better to remove AFSPA from the (entire) country because India is the biggest democratic country in the world -- excesses committed by security forces (using) this Act does not go well with the people'.

Appealing to people in his state to remain calm and maintain peace, he described the killings as 'inhuman' and an 'act of cowardice'.

The cabinet has directed the SIT to complete the investigation within a month, they said.

Officials said the situation in the state where people had taken to the streets in protest against the firing was 'tense but calm'.

An initial report submitted to the state government on Sunday claimed the army made no attempt to ascertain the identity of the civilians returning from work on a pick-up truck before shooting them in Nagaland's Mon district on Saturday.

The joint report by the state's Director General of Police (DGP) T John Longkumer and Commissioner Rovilatuo Mor quoted eyewitnesses, who said the Army's special forces tried to 'hide' the bodies of six people by wrapping and loading them on a pick-up van with the intention of taking them to their base camp.

Kronu said that altogether 14 civilians have died, while two seriously injured are undergoing treatment in neighbouring Assam, and six are being treated in Dimapur.

The firing incidents took place in Oting-Tiru area on December 4 and Mon town on December 5.

The first incident in which six civilians were killed, occurred when army personnel mistook coal mine workers returning home in a pick-up van on Saturday evening, to be insurgents belonging to the Yung Aung faction of the banned outfit National Socialist Council of Nagaland-Khaplang.

In the ensuing melee, one soldier was killed and army vehicles burnt down.

Soldiers who fired in self-defence killed another seven civilians.

Rioting spilled over into Sunday afternoon when angry mobs vandalised the offices of the Konyak Union and an Assam Rifles camp in the area, setting fire to parts of the camp, police had said.

At least one more person was killed, as security forces fired back at attackers.

The Nagaland Police filed a suo moto FIR against the 21st Para Special Force of the Army.

The Indian Army has ordered a court of inquiry headed by an officer of major general rank into the Nagaland incident.

Expressing regret over the Nagaland firing incident, Shah on Monday said a probe by an SIT will be completed within a month and asserted that all agencies must ensure such happenings do not recur while taking action against insurgents. 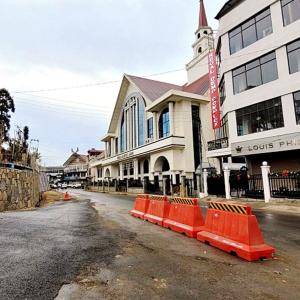