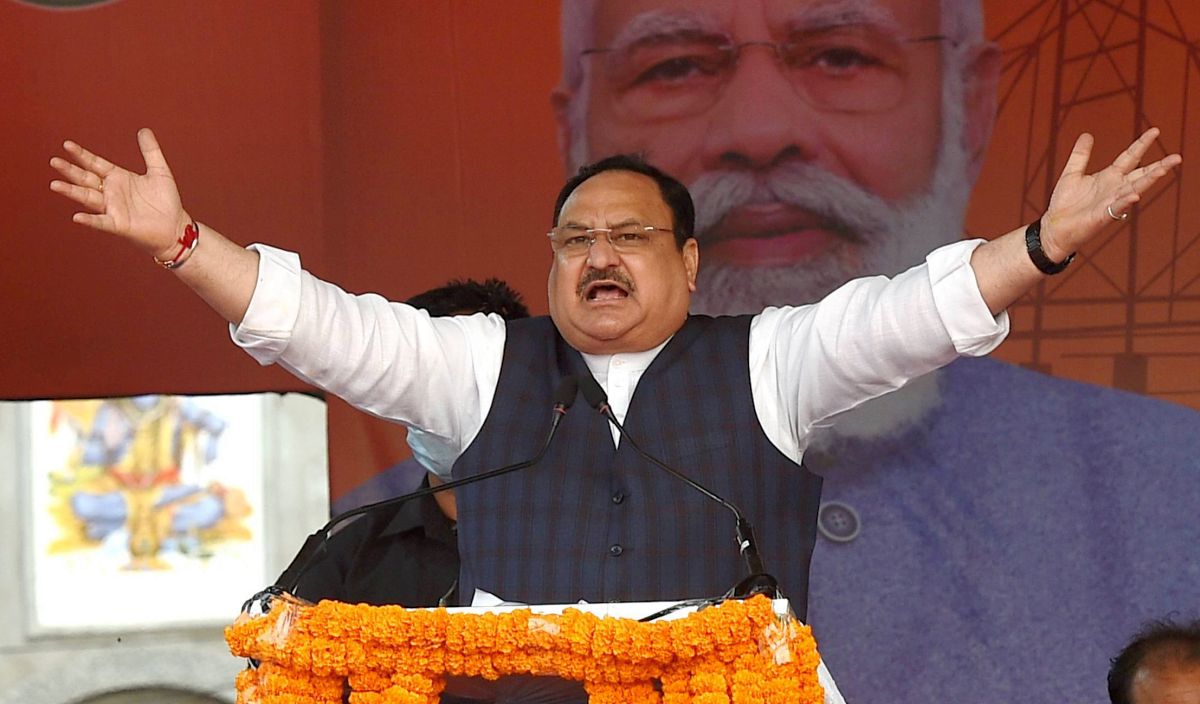 He also accused the TMC government of politicising the administration and criminalising the police.

Claiming that the TMC's slogan of "Maa, Mati, Manush" (mother, land and people) has been reduced to "dictatorship, tolabaji (extortion) and (Muslim) appeasement," Nadda said the TMC dispensation has betrayed the trust people had reposed in it.

He alleged only the ruling TMC leaders have benefited under Mamata Banerjee and even funds meant for relief in the aftermath of cyclone Amphan were misappropriated by thenm.

Reaching out to farmers, Nadda ate the humble khichdi seated on the floor with farmers as he reached out to peasants in election-bound West Bengal, and excoriated the Mamata Banerjee government for depriving them of the benefits of the PM Kisan Scheme to "satisfy her ego".

On a day when farmer unions have called a 'chakka jam' against three contentious agricultural laws, Nadda reaffirmed the BJP and the Narendra Modi government's commitment to the welfare of the farming community.

Mocking Banerjee for agreeing to implement the PM Kisan Samman Nidhi Yojana only after realising that her party is fast losing ground among the farmers in the state, Nadda vowed justice for them once the BJP is voted to power in West Bengal.

"What Mamatadi did to the farmers of Bengal by depriving them of PM Kisan Scheme was an injustice. Due to her whims and to satisfy her ego, Mamata Ji did not allow the scheme to be implemented. This has affected over 70 lakh farmers who for the last two years have been deprived of annual aid of Rs 6,000," he said.

Nadda was addressing a rally of farmers during the last phase of the month-long 'Krishak Suraksha Abhiyan' and 'Ek Mutthi Chawal' campaign which he had flagged off in order to mobilise the farming community in the state in favour of the BJP.

The programmes were also a part of BJP's outreach to farmers to blunt the opposition's charge that the ruling party and the Modi government were "anti-farmer" following farm protests at Delhi's border points.

Nadda said the prime minister recently inaugurated the 100th Kisan Rail, an initiative that will help farmers transport their produce anywhere in the country with great ease. Lauding the Modi government for its pro-farmer policies, the BJP leader said, it ensured that they got 1.5 times more than the input cost for their produce.

"Today, when about 25 lakh farmers of Bengal sent applications for securing the benefits of PM Kisan Samman Nidhi scheme to the central government, Mamata Ji is saying she will implement it. Mamata ji, elections are round the corner. Now, it's too late," he said, castigating the chief minister.

Nadda said the state's people have made up their mind to bid "namaste and tata" to Banerjee and her party after the assembly polls.

"When I was coming here I was greeted with 'Jai Shri Ram' slogans. But I don't understand why Mamata ji gets angry after hearing it. Had you served the farmers well, you wouldn't have lost your cool," he said, while referring to the January 23 incident at Victoria Memorial Hall in Kolkata.

Banerjee had declined to speak at the event to celebrate Netaji Subhas Chandra Bose's birth anniversary where "Jai Shri Ram" slogans were raised in the presence of Prime Minister Narendra Modi.

Nadda, state BJP chief Dilip Ghosh and other party leaders later had a community feast where they ate a humble lunch of khichdi and vegetable curry while seated on floor with farmers.

Standing atop a decorated lorry with Dilip Ghosh and others, he showered jubilant supporters with marigold petals and waved to enthusiastic crowds that gathered along the 1 km stretch between Foara More and Guru Rabindranath Tagore's statue.

People watched the procession from rooftops and balconies and were seen shooting videos with their mobile phones.

The streets were lined with BJP's flags and buntings as the cavalcade inched its way through the narrow and crowded streets.

Supratik Sengupta
© Copyright 2021 PTI. All rights reserved. Republication or redistribution of PTI content, including by framing or similar means, is expressly prohibited without the prior written consent.