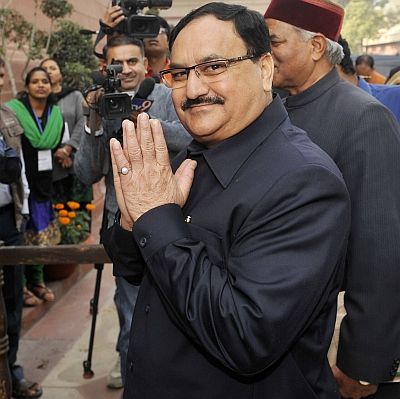 Union minister J P Nadda and five-term MLA Jairam Thakur are being seen as front-runners for the chief minister's post in Himachal Pradesh, while incumbent Vijay Rupani is the favourite in Gujarat but speculation continues over his fate after the Bharatiya Janata Party's subdued performance.

Nadda's proximity to the party top brass is seen as a big plus for him even though some party leaders believe that the the BJP's central leadership may finally choose the chief minister from among the MLAs.

Jairam Thakur, a five-term MLA, and some other senior BJP lawmakers in the state, including Mohinder Singh, who won for a seventh time, five-term MLA Rajiv Bindal, former state BJP chief Suresh Bharadwaj, and Krishan Kapoor, both elected for a fourth term could also be considered.

Sources said the party opt for a Thakur leader, the dominant community in the hill state. Nadda is a Brahmin.

Some in the state party unit continue to bat for Dhumal despite his defeat, with Varinder Kanwar, the MLA from Kutlehar, even offering to vacate his seat for him.

The BJP has 44 seats in the 68-member assembly.

In Gujarat, where it has 99 seats, seven more than the 92 needed for a simple majority, Rupani leads the race. BJP chief Amit Shah had said during the campaign that the elections would be fought under Rupani.

A relatively subdued show has, however, altered the situation to some extent, with many in the party wondering if the central leadership would go for a new leader at the helm, especially somebody from the Patidar community, which has traditionally backed the BJP before a section turned against it in these polls on the quota issue.

"The central leadership will take a call. But Rupani is the obvious choice as Shah had named him and he is seen as a clean leader," a party leader said.

"Due to the thin margin of victory this time, the party leadership may think of changing the chief minister," said another.

The party leadership's knack of springing a surprise in making its choices for top positions, be it a chief minister or the president, has made some wonder if it will go for a change in Gujarat.

Yogi Adityanath and Manohar Lal Khattar were surprise choices as chief ministers of Uttar Pradesh and Haryana, and so was Ramnath Kovind for the post of the president.

Even Rupani was seen as a surprise choice when the party decided to replace Anandiben Patel last year.

While many thought Nitin Patel was an obvious replacement of Anandiben, the party picked up Rupani, who was then the state party chief, for the top post and made Patel his deputy.

The BJP parliamentary board had on Monday appointed Union minister Arun Jaitley and party general secretary Saroj Pandey as central observers for choosing the new chief minister in Gujarat in consultation with MLAs. 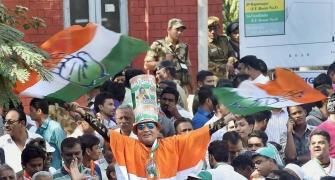