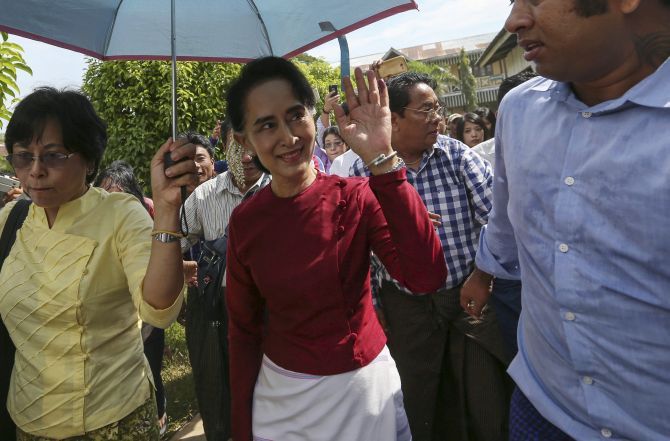 After decades of military rule, people of Myanmar have been voting on Sunday in the first general election in 25 years, also billed as the freest election ever.

The ruling Union Solidarity Development Party, backed by the military, is one of the front runners. Opposition leader Aung San Suu Kyi's National League for Democracy is expected to make big gains in the polls, though she is constitutionally barred from staking a claim to be the next president of the country.

Incumbent President U Thein Sein said the authorities would respect the poll results.

About 30 million people are eligible to vote in the election in which over 6,000 candidates from more than 90 parties are vying to be elected to the 664-seat parliament.

Official results of the polls are expected to start trickling out by early Monday.

Security is tight, with some 40,000 police guarding polling stations.

Meanwhile, the Myanmar Times, which is reporting on the elections as they are happening, said on Sunday morning that the Latha township in Yangon was unusually quiet.

In its initial report, it said that the people it had talked to had said that it was their intention to vote Suu Kyi’s NLD.

Ma Thida Wine, daughter of a schoolteacher, was quoted by the daily as saying that she is worried about the impact of her vote on her family, as she lives with her mother in a government-provided housing. However, she said that this fear would not sway her from casting her vote for the right party and leader. ‘I believe that is my right as a citizen,’ she was quoted by the Myanmar Times as saying.

Voting will continue till a little after 4 pm because of the long queues, polling station heads said. Poll station managers said they would shut the gates of their respective centres at 4 pm, but those already in queue will still be allowed to exercise their right to vote.

In the South Okkalapa township of the Yangon Region, Yangon’s former mayor U Aung Thein Linn cast his vote at 9 am at No 1 Basic Education High School, Ward 7, South Okkalapa. U Aung Thein Linn is running for a Pyithu Hluttaw (House of Representatives) seat for the Union Solidarity and Development Party. With three polling stations at the school, over 600 were in line to vote.

In the Kawhmu township of the same region, the daily reported that reporters from German ZTF media were stopped from interviewing voters at the polling station set up in the compound of Aphyauk village tract’s Basic Education Primary School.

At 8.50 am local time, the group was instructed by loudspeaker to leave the compound.

Village tract sub-commission chair U Hla Aung later allowed the reporters to re-enter and take photos, but instructed them not to conduct interviews.

After voting on Sunday morning in Yangon's Bahan township, Aung San Suu Kyi headed to Kawhmu, where she is campaigning for a seat in the Pyithu Hluttaw.

Voters began queuing at 5.45 am in Pin Lon Quarter, Kalay township. The line only grew longer with time as more and more voters turn out to cast their ballots.

The military will not interfere with the voting process, nor take control of the country if the vote does not go as per its wish, Tatmadaw Commander-in-Chief senior general Min Aung Hlaing was quoted as saying after he cast his ballot in Nay Pyi Taw.

He said he wants the winning party to be the one on which the people really want to rely and that he will accept the people’s wishes. He also urged the people to respect the UEC’s announcement to remain stable during the transition period.

He said winners and losers must accept the election result.

"If (they do) not there will be problems. Recognising the election result is the way of democratic practice. This is the way of political maturity," he said.

"If problems happen, the administrative body will take action according to law. The military will take part if necessary; if not, we don’t want to be involved in other matters," he added. 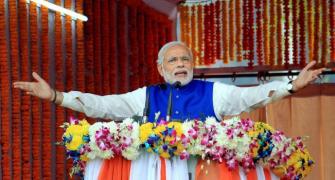 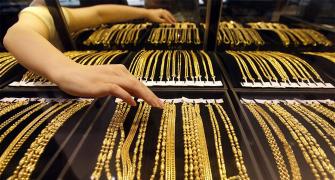 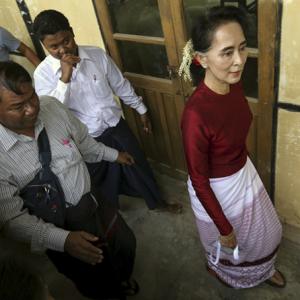 The other election India should watch today 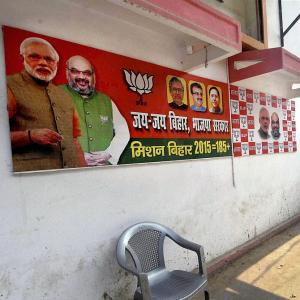