Myanmar signs deal with B'desh, to take back Rohingya refugees in 2 months Amid mounting global pressure, Myanmar on Thursday agreed to take back tens of thousands of Rohingyas who fled the country to Bangladesh following a military crackdown that has been dubbed as "ethnic cleansing" by the United States.

Following weeks of talks, the two neighbours on Thursday signed an 'Arrangement' on return of displaced Myanmar persons sheltered in Bangladesh, a foreign office statement said in Dhaka.

The "Arrangement", the statement said, stipulated that "the return (of Rohingyas) shall commence within two months" while a joint working group would be established within next three weeks and a "specific bilateral instrument (physical arrangement) for repatriation will be concluded in a speedy manner".

Bangladeshi officials familiar with the development said the agreement was being negotiated with Myanmar for the past few months while it was nearly finalised on Wednesday at Naypyidaw by senior officials of the two countries.

Putting pressure on Myanmar, the US had declared as "ethnic cleansing" the violence against Rohingya Muslims in the country and warned that the Trump administration could impose new penalties on the Buddhist-majority country.

Also, Chinese Foreign Minister Wang Yi travelled to both Bangladesh and Myanmar this week and held talks with their top leaderships to resolve the Rohingya crisis, one of the world’s most dire refugee crisis.

Wang had proposed initiatives including three phased solution so as to fundamentally resolve the Rohingya crisis. Bangladesh and Myanmar had agreed to his proposal.

The statement said the foreign minister earlier called on State Counsellor Aung San Suu Kyi and discussed issues of mutual cooperation in areas of trade, energy and connectivity under Bangladesh-China-India-Myanmar.

In brief comments to media, Ali described the deal as the "first step" while Myanmar said it was ready to receive the Rohingya "as soon as possible".

"We are ready to take them back as soon as possible after Bangladesh sends the forms back to us," foreign news agencies said quoting Myint Kyaing, a permanent secretary at Myanmar's ministry of labour, immigration and population.

Ali also handed over three ambulances for Rakhine State, the scene of atrocities, as "gift from the government of Bangladesh" to Myanmar. 'We are not a threat to anyone, don't treat us as terrorists' 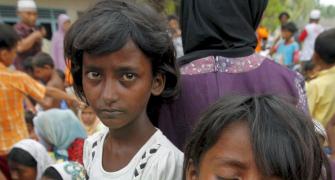 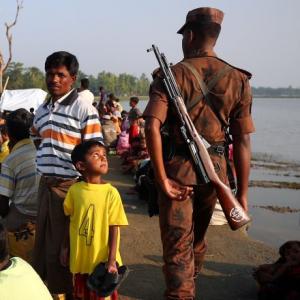