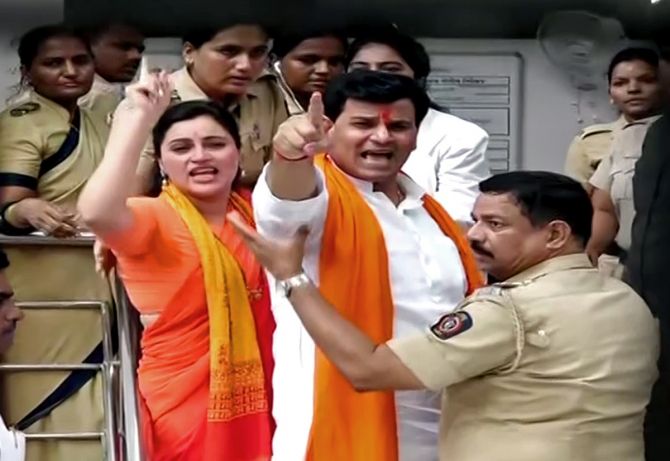 In the letter sent on Sunday, the Lok Sabha MP from Amravati has demanded strict action against Mumbai police commissioner Sanjay Pandey and claimed the action against her and her husband was taken on directions of Maharashtra Chief Minister Uddhav Thackeray.

Navneet Rana and her MLA-husband Ravi Rana were arrested on Saturday after they gave a call for the chanting of the Hanuman Chalisa outside Chief Minister Thackeray's private residence 'Matoshree' in Mumbai, which had triggered angry protests by Shiv Sainiks. The couple, now in jail, later withdrew their call, citing Prime Minister Narendra Modi's visit to Mumbai for an event.

Hitting out at the Shiv Sena, which heads the MVA government in the state, the MP said the Uddhav Thackeray-led outfit, which claims to be a party embracing the avowed principles of Hindutva, has clearly diluted its stand so as to appease the ideology of the other ruling coalition partners.

She said the Shiv Sena contested the 2019 Maharashtra assembly elections against the Congress and the Nationalist Congress Party, but formed a post-poll alliance with these very parties, a move driven by its desire to get the post of chief minister.

"I submit that I have been vociferous in my criticism of the Maha Vikas Aghadi government in as much as the state of Maharashtra, under this government is riddled with corruption, police brutalities etc. I state and submit that it is my constitutional right as a citizen and as a member of Parliament to engage in constructive and honest criticism of the government and its workings," said Navneet Rana.

She said the Shiv Sena under its president Uddhav Thackeray has completely strayed from its avowed Hindutva principles as it wanted to 'betray' the public mandate and form a post-poll alliance with the Congress and the NCP, key constituents of the ruling MVA.

" I, with the sincere hope to rekindle the flame of Hindutva in the Shiv Sena, had declared that I shall go to the residence of the chief minister and chant the Hanuman Chalisa outside his residence. This was not meant to incite any religious tensions. In fact, I had invited the chief minister to join me in chanting the Hanuman Chalisa," she said.

Navneet Rana claimed her actions were not against the chief minister.

However, looking at the fact that her actions may prove detrimental to the law and order situation in Mumbai, she had publicly withdrawn from the said exercise, said the letter.

The parliamentarian, in the letter, called her and her husband's arrest by the Mumbai police as illegal and mentioned about slapping of sedition charge (IPC section 124A) against them.

The MP spoke about being put up in a lock-up without due regards to the office held by her and not getting drinking water while in police custody. Navneet Rana alleged she was abused on the basis of her caste.

Navneet Rana, in the letter, sought action against top Mumbai police officers over her arrest.

"I emphatically state that I have reason to believe that the police action against me and my husband is only on the directions of the Chief Minister Shri Uddhav Thackeray. Under the circumstances, I am forwarding this representation to you as the guardian and custodian of the dignity of the Lok Sabha and its members to kindly look into the matter.