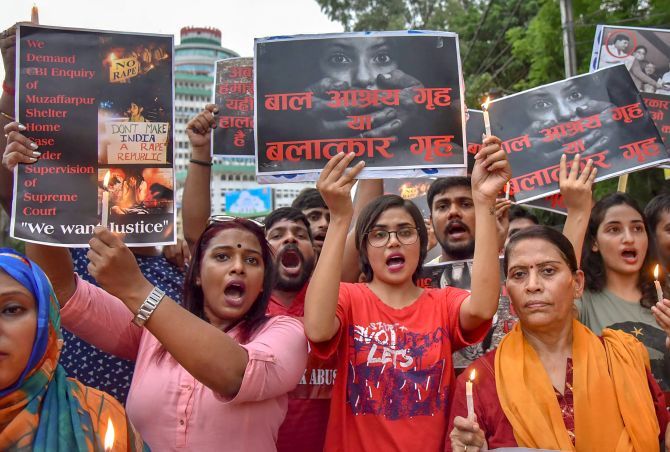 The former Union minister said Verma of the Janata Dal-United should take a call on the demand for her resignation by opposition parties, keeping in view the "lapses on part of the social welfare department" on which the scandal has been blamed.

"The scandal points at huge lapses on part of the state social welfare department. How could the department be unaware of such a huge racket taking place right under its nose?" Thakur asked.

"There are also complaints of similar irregularities having taken place at other organisations controlled by the department," Thakur said.

Asked about the demand by opposition parties for the resignation of Verma, whose husband has been accused of being a regular visitor to the Muzaffarpur shelter home by the wife of one of the arrested accused, Thakur said, "She should take a decision on the same based on her conscience. I think she should take moral responsibility for the scandal."

The BJP is a partner in the ruling coalition in Bihar.

Asked about Thakur's statement, the JD-U, which is headed by Chief Minister Nitish Kumar, came up with a guarded response.

"C P Thakur has expressed his personal opinion. It is not that the BJP has come up with an official stand. Deputy Chief Minister Sushil Kumar Modi, himself a senior BJP leader, has been articulating the government's position on the issue," JD-U spokesman and MLC Neeraj Kumar said.

Six officials of Bihar's social welfare department, which has drawn flak after the sexual abuse of girls at a state-funded shelter home in Muzaffarpur came to light, have been placed under suspension on account of "negligence and dereliction of duty".

Notifications to this effect were issued on Saturday.

The officials put under suspension were posted as assistant directors of Child Protection Units in Muzaffarpur, Munger, Araria, Madhubani, Bhagalpur and Bhojpur districts.

All the officials, suspended with immediate effect, have been charged with "failure to take adequate legal action" with regard to "assault, indecent behaviour and other undesirable activities" at shelter homes within their respective areas of jurisdiction.

The Muzaffarpur shelter home incident had surfaced in a social audit conducted by Mumbai-based Tata Institute of Social Sciences.

Meanwhile, the JD-U asserted that Nitish Kumar would not resign and said it was ready for a Supreme Court-monitored probe into it.

It was a "friendship day" of parties seeking "political mileage" from the "unfortunate and shameful" incident in the state, he said.

"How can rape of young girls which has shamed us could be an issue for opposition parties to unite against the NDA government and the Nitish Kumar-led government in Bihar and demand his resignation. This politics over hapless victims in Bihar is the most unfortunate thing," Tyagi said in a press conference. 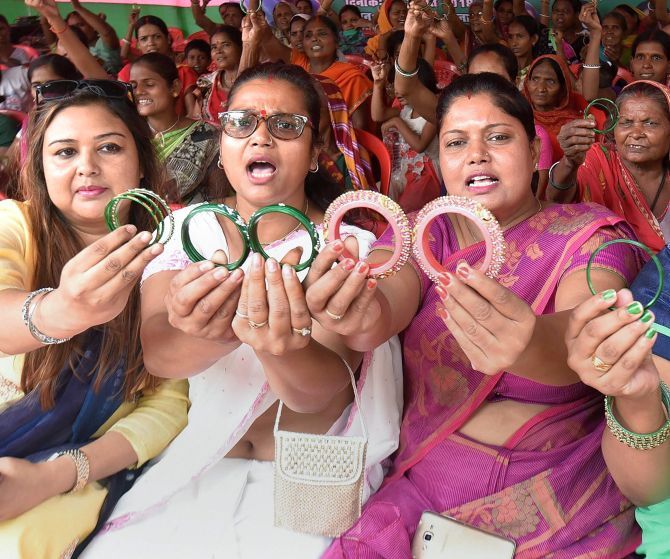 Tyagi asserted that despite the opposition's demand, Kumar would never step down as the chief minister of Bihar and challenged them to unseat him in the assembly.

"Nitish is a sensitive person and felt ashamed over the incident which the opposition parties are trying to use to hit at his conscience so that he steps down. But, he will never step down, we will not let him do so," he said.

Tyagi also alleged that the resignation demand was aimed at "helping" sand mining and bootlegging that have been effectively checked by the state government.

"I also condemn Sitaram Yechury and D Raja who have forgotten the killings of JNU president Chandra Shekhar and Purnia MLA Ajit Sarkar and joined the protest organised by RJD," he said.

The JD-U Rajya Sabha MP and spokesperson of the party said that Nitish Kumar had written to the Patna high vourt for monitoring the probe into the case and asserted that the party was ready for such a probe by even a Supreme Court-monitored panel.

He asserted that the Bihar government acted against the accused swiftly and, as per the wish of RJD and other opposition parties, sought a CBI probe into the incident.

"Still, they are using this incident to spread lies and conspiracy theories for political purpose and to help sand and liquor mafia who have been effectively controlled by the Nitish government in the state," he said.

He charged that the opposition parties wanted "anarchy" and "jungle raj" back in Bihar by replacing JD-U and Nitish Kumar.

Tyagi also demanded that all shelter homes for juveniles in the country be probed under a monitoring committee of the apex court.