Hours after the Joe Biden Administration reacted to the farmer protests, India on Thursday said the comments must be seen in their entirety and compared reactions to the violence at the Red Fort with those seen after storming of the United States Capitol. 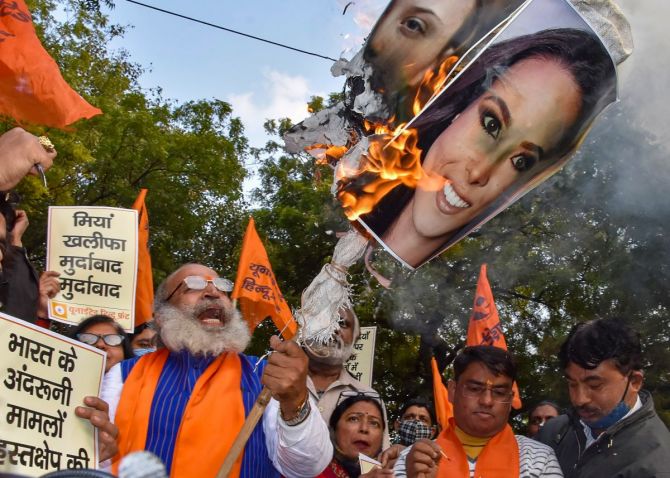 At a media briefing, External Affairs Ministry Spokesperson Anurag Srivastava said any protests must be seen in the context of India's democratic ethos and polity, and the ongoing efforts of the government and the concerned farmer groups to resolve the impasse.

Srivastava said India has taken note of the comments by the US, adding the two countries are vibrant democracies with shared values.

"The incidents of violence and vandalism at the historic Red Fort on January 26 have evoked similar sentiments and reactions in India as did the incidents on the Capitol Hill on 6 January and are being addressed as per our respective local laws," he said.

"The temporary measures with regard to internet access in certain parts of the NCR region were therefore understandably undertaken to prevent further violence," he said.

In its first reaction to the ongoing farmers' agitation, the new US administration on Thursday said it encourages that any differences between the parties be resolved through dialogue even as it backed steps that can improve the efficiency of India's markets and attract greater investment.

The US also said peaceful protests and unhindered access to the internet are 'hallmarks' of a 'thriving democracy'.

"As you can see, the US state department has acknowledged steps being taken by India towards agricultural reforms," the MEA spokesperson said.

Asked if a 'motivated campaign' was being run and whether any entity was behind foreign reactions to the farmers' stir, Srivastava did not give a direct reply.

"What I will say broadly is that the debate on reforming the agricultural sector is an issue best addressed by the Indian democratic polity.

"Those following it should have an informed and objective view. We are making sure through our activities that this is what happens," he said.

Srivastava also said India has issued a mutual legal assistance request to the US for investigation in the matter of 'Sikhs for Justice and Referendum 2020'.