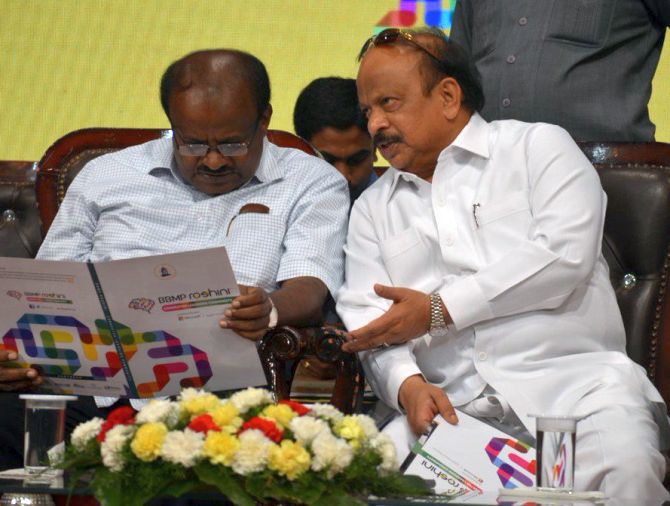 In a no-holds barred attack, senior Karnataka Congress leader Roshan Baig on Tuesday accused the state party chief of being a ‘flop show’ and scoffed at All India Congress Committee General Secretary K C Venugopal as a ‘buffoon’, prompting the party to issue a show cause notice for his outburst.

Baig, a senior MLA, also slammed former chief minister Siddarmaiah for ‘dividing’ the Hindu society by attempting to give separate religion tag to Lingayat community and ‘abusing’ the Vokkaliga community during his tenure in the top post.

The attack by Baig who was miffed over being denied ticket to contest Lok Sabha polls came after the exit polls predicted a rout for the Congress-Janata Dal (Secular) alliance in Karnataka and National Democratic Alliance’s return to power at the Centre.

Baig also appealed to the Muslims to ‘compromise with the situation’ (about Bharatiya Janata Party-led NDA being in power) and not to remain like ‘cattle’ and be reduced to a vote bank.

"Venugopal (in-charge of party affairs in the state) should have resigned when Congress got 79 seats in assembly polls (a year ago). I feel sorry for such general secretary coming to our state...," he said

He added: "Buffoons like Venugopal and arrogant attitude of Siddaramaiah and the flop show president Dinesh Gundu Rao...the result is this (Lok Sabha exit polls forecast)."

A red-faced Karnataka Pradesh Congress Committee issued a ‘show cause’ notice to Baig for his outbursts.

It said Baig's remarks were being considered seriously as an ‘anti party activity’, and asked him as to why disciplinary action should not be taken against him.

Seeking Baig's explanation in a week, the notice signed by Karnataka Pradesh Congress Committee general secretary V Y Ghorpade said, "On failing to reply further disciplinary action will be taken against you."

The notice has taken strong exception to Baig's comments against Venugopal, Rao and Siddaramaiah.

"By making statements to the media and causing discomfort to the party and expressing your displeasure publicly through the media, you have conducted yourself by going against the party's principles. Your conduct has dented party's prestige," it said.

Baig said the ‘drastic decisions’ led to the downfall of the party in the assembly election and now the same was reflected in the Lok Sabha exit poll results too.

"Nobody should divide the religion. A chief minister should behave like a statesman. What it means if he (Siddaramaiah) thinks he will win the election by dividing the religion? Isn't it madness?" he said.

He was referring to the Siddaramaiah government’s decision to seek a separate religious tag to Lingayat community.

While the Congress leaders tried to divide the Lingayat community, they abused Vokkalikas, alleged Baig.

According to political observers, the decision on Lingayat community had cost the Congress dearly in the assembly polls, in which the BJP emerged as the single largest party but fell short of numbers.

The Congress and JD-S then formed a post-poll alliance and the government.

"Look at the way CLP leader (Siddaramaiah) behaved -- his ego. After going to the doors of Deve Gowda and Kumaraswamy with a proposal to form a coalition government, now you are saying I am the chief minister and I will be the chief minister again. People don't like such behaviour," Baig added.

Baig's angst was against Congress giving ticket to just one Muslim candidate Rizwan Arshad against the demand for three candidates.

"Earlier they used to give tickets to three minorities. Today they gave it to only one," Baig added.

Asked whether he would quit Congress, Baig said he had not taken any decision yet.

Meanwhile, Baig's son Ruman Baig in a tweet said: "Congress has created a fear psychosis amongst minorities. They've created a narrative that minorities should feel guilty if they decide to vote for BJP. But in reality, Congress leadership just uses the minority vote bank as a safety cushion."

"The results are not yet out but he is giving statements in a way as if he is extremely happy with the projections," Rao said.

Baig had earlier, too, expressed displeasure against the Congress leadership for not being included in the cabinet, headed by Chief Minister H D Kumaraswamy.

His outburst has come at a time when another senior MLA, Ramesh Jarkiholi, who is hobnobbing with the Bharatiya Janata Party, had threatened to quit the Congress along with other MLAs 'soon'.

A bete noire of Siddaramaiah, Vishwanath said, "Our Roshan Baig at least has come to know about the truth at the end. Thanks to Mr Roshan."

Asked if he was thanking Baig for his comments against Siddaramaiah, he said, "I'm saying thanks for his statement today in total, after understanding the truth and reality."

"...Roshan has understood the ground realities at the end. There is nothing wrong in what he has said; there is nothing that is false. He has spoken the truth," he said.

Pointing out that Baig is an influential Muslim leader, Vishwanath said the statements he made during the holy month of Ramazan is 'appropriate', 'reality' and 'true'.

"Roshan Baig knows the truth and reality of that party (Congress) and he has spoken out, nothing more than that," he said, adding that he too has been saying similar things for long.

Vishwanath has repeatedly hit out at the Congress-JD(S) coordination committee Chairman Siddaramaiah for his conduct. Last week, with the clamour growing within Congress for Siddaramaiah to become CM once again, Vishwanath had hit out at the CLP leader, raising questions about his performance as chief minister in the previous government, and had termed the demand as 'chamchagiri' (sycophancy).

His statements had resulted in a public spat between the two, with Siddaramaiah hitting back and asking the JD-S leadership to intervene.

On Saturday too, Vishwanath had raised questions about Siddaramaiah's performance as coordination committee chief and hit out at him or not inducting him and Rao to the committee.