Indian Union Muslim League moved the Supreme Court Thursday challenging the Citizenship (Amendment) Bill, saying it violates the fundamental Right to Equality of the Constitution and intends to grant citizenship to a section of illegal immigrants by making an exclusion on the basis of religion. 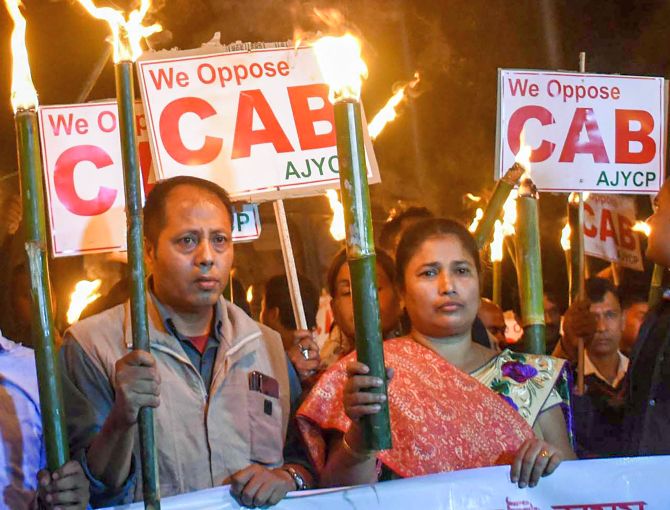 The bill, which proposes to give Indian citizenship to non-Muslim migrants from Pakistan, Afghanistan and Bangladesh, has been cleared in both Lok Sabha and Rajya Sabha and is awaiting Presidential assent.

The plea, filed through advocate Pallavi Pratap, seeks an interim stay on the operation of CAB and the Foreigner Amendment (Order), 2015 and Passport (Entry Into Rules), Amendment Rules, 2015.

The petition alleged that the government's CAB was against the basic structure of Constitution and intended to explicitly discriminate against Muslims as the act extended benefits only to Hindus, Sikhs, Buddhists, Jains, Parsis and Christians.

"It is submitted that illegal migrants are class by itself and therefore any law which is applicable to them should be irrespective of any religion, cast or nationality basis," the plea said.

The government has given no explanation on the Bill excluding minorities like Ahmadiyyas, Shias and the Hazaras who have a long history of persecution in Afghanistan and Pakistan, it alleged.

"The Act does not prescribe any standard principle or norm behind choosing aforesaid three neighbouring countries, whereby it does not extend the benefit to religious minorities belonging to other neighbouring counties such as Sri Lanka, Myanmar, Nepal and Bhutan.

"The classification of Afghanistan, Pakistan and Bangladesh is not founded on rationale principle to justify a separate special treatment for the religious minorities facing persecution on the basis of religion," the petition said.

It said that the CAB will ensure that illegal Muslim migrants excluded after the NRC exercise be prosecuted and, those belonging to the community of Hindus, Sikhs, Buddhists, Jains, Parsis and Christians shall be given the benefit of naturalization as an Indian citizen.

"Therefore all those Muslims who have been excluded in such pan India NRC exercise shall have to prove their citizenship before the Foreigners Tribunal, all because they are Muslims and not Hindus, Sikhs, Buddhists, Jains, Parsis and Christians.

"This blatant discrimination put into legislation by the Amendment Act is not only unconstitutional but also inhumane and opposed to the very idea of our Nation," the plea said.