The Nationalist Congress Party on Thursday demanded the death sentence for the rapists of three minor sisters in Maharashtra, as it pushed for the expeditious passage of the bill on crimes against women.

"It is unacceptable. All of us have to hang our heads in shame. Is there anything short of the capital punishment which should be given to them," Heavy Industries Minister and NCP eader Praful Patel told reporters outside Parliament.

Patel was referring to the rape-cum-murder of three minor sisters in Bhandara district of Maharashtra a couple of days ago.

Responding to questions on differences among political parties on certain provisions of the ordinance which seeks to enhance punishment for crime against women, Patel said strong laws were required to deal with the problem.

"It has to be with consensus. After what has happened in Delhi, the nation has awakened to this new reality," he said.

When asked about reservations being expressed by political parties on provisions of the Criminal Law (Amendment) Ordinance promulgated earlier, External Affairs Minister Salman Khurshid said views of various quarters would be incorporated when a fresh bill replaces the ordinance.

"I can't understand why people try to confuse issues. Ordinance is an ordinance. It has to be replaced by a bill in Parliament...it (the bill) will perhaps have additionalities that public minded persons, activists, political parties believe need to be included," he said, adding modifications to the existing provisions can also be made. 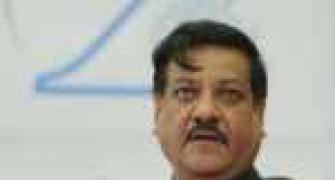 No load shedding this summer in Maharashtra, promises CM