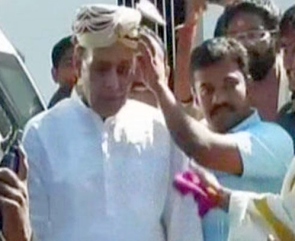 A controversy has erupted over a Rashtriya Swayamsevak Sangh activist and accused in a murder case placing a turban on the head of Union Home Minister Rajnath Singh during his visit to Thiruvananthapuram last week. The incident, which has also raised security issues, happened when Singh visited the Sree Padmanabhaswamy Temple last Saturday.

When the minister came out of the shrine after prayers, RSS activist Santhosh approached Singh and placed on his head a turban with the consent of local Bharatiya Janata Party leaders and security guards. Santhosh is the prime accused in the case relating to the murder of DYFI activist Vishnu in 2008 in the city. He is now on bail.

With the incident triggering controversy, state Home Minister Ramesh Chennithala on Monday said it was a serious matter but there was no security breach on the part of the Kerala police as Singh's security was in the hands of the National Security Guard.

Of course, this is a serious incident. But the Kerala police had no role in it as Singh is a person under NSG security," Chennithala told mediapersons at Kottayam.

As local media beamed the visuals of Santhosh placing the turban on Singh, Communist Party of India-Marxist Member of Legislative Assembly V Sivankutty demanded an inquiry and sought explanation from both the Conngress-led United Democratic Front government and the state unit of the BJP.

BJP district president S Suresh, however, blamed CPI-M for stoking an unnecessary controversy out of desperation over a Central Bureau of Investigation probe into the murder of RSS activist Elamthotathil Manoj in Kannur.

Singh had on Friday visited the home of Manoj at Kathirur in Kannur and assured the RSS-BJP leadership of a CBI probe in the case. CPI-M leaders have resented the move and alleged that the Congress and the BJP were hand in glove in the matter.