The famous 'Mumbai spirit' came handy once again on Monday night when central and western railways' motormen struck work and left lakhs of commuters in a lurch. By 7 pm, the local trains had almost stopped plying.

Those who boarded the locals, hoping that they would chug out, instead had to face a sweltering and sweating crowd.

"It was extremely mean on the part of the motormen, as they worked in the first half and allowed the people to reach their destinations. This compounded the problem as they struck work big time in the evening, only to leave lakhs of commuters stranded at all suburban stations in the megapolis," said Vikram Deshmukh, an exasperated commuter.

Anxious family members kept calling each other to keep themselves posted about the whereabouts of their near and dear ones.

But are not Mumbaikars known for their never-say-die attitude, the famous Mumbai spirit, which helps it spring back to its feet, braving all odds and adversities?

Rains, strikes or deluge, long live the Mumbai spirit! So how could they be cowed down? People of the city -- which never sleeps -- believe in the work-hard-and-party-harder mantra.

This unheralded, mandatory holiday of sorts provided one such occasion. It proved to be a blessing in disguise for those who otherwise have to slog it out round-the-clock.

Mumbaikars took to merriment with a vengeance. Movie theatres, pubs, hotels and clubs did brisk business, as they were unusually choc-a-bloc with stranded commuters, who were left with nowhere to go and had to take refuge in these places.

Lovelorns found it romantic to roam through the deserted South Mumbai roads, culminating their strolls or rides at the Marine Drive, only to be shooed away by vigilant cops a few minutes later.

"We all colleagues had a gala time. We got a lot of time to spend together and bond. Our hectic schedules scarcely provide us with such an opportunity," said Ashfaque Khan, who translated this otherwise nightmare into a dream, after the city was crippled by the railway motormen's strike.

While some hitched a ride, other over enthusiastic commuters climbed trucks, tippers and tempos to travel. The strike proved to be a boon for taxi and auto rickshaw drivers, who had a field day, charging the desperate Mumbaikars double and triple of the actual fare amount.

The roads were busting at their seams due to the stalled train services, and the traffic moved at a snail's pace. 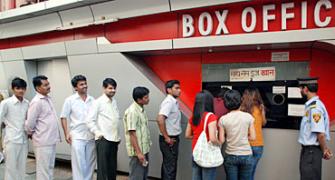 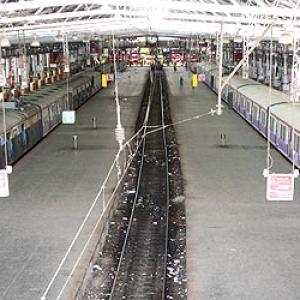 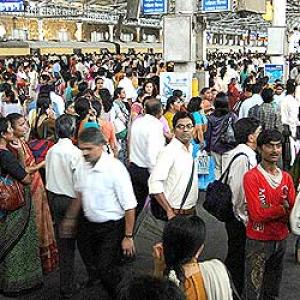 How has the Mumbai train strike hit you? Share your story!