Mumbai violence may have been pre-planned: Police

The police on Sunday arrested 23 people in connection with the violence in Mumbai on Saturday, in which two people were killed and 55 people, including 46 policemen, were injured.

Besides the 23 people, who were booked under Section 302 of the Indian Penal Code, the organisers, Raza Academy and Madina Tul Ilm Foundation, also faced similar charges, said the police.

The accused were produced in a local court, which remanded them to police custody till August 19.

The police suspect that the violence was pre-meditated as word about the event was spread through Facebook, sources said, adding that the investigators might rope in the Cyber Crime Cell to find out who posted the online messages and sent the SMSes.

Police suspect that the violence was a "pre-planned" act as participants at the Azad Maidan rally came "prepared" to wreak havoc.

As rioters had carried sticks and rods with them, the police are now trying to find out from where the weapons were procured and where they were stored before the trouble started.

"We are also investigating the source of petrol cans. The mob set the vehicles on fire in a planned way," a police official said.

According to the police, the CCTV footage showing the protesters pouring petrol on vehicles before torching them has been obtained and would be examined.

A special team of the Crime Branch, headed by an assistant commissioner of police and consisting of 12 officers, will conduct the investigations.

The rally, held on Saturday afternoon at Azad Maidan in south Mumbai to denounce riots in Assam and the alleged attacks on a minority community in Myanmar, turned violent with the mob pelting stones, torching vehicles and damaging buses, forcing the police to open fire. Two men -- Mohammed Umar, 22, and Altaf Shaikh, 18 -- were killed in the violence.

Meanwhile, two police rifles snatched away by the mob from police personnel on Saturday were on Sunday found dumped at Amritnagar in Mumbra, in neighbouring Thane district, said the police. 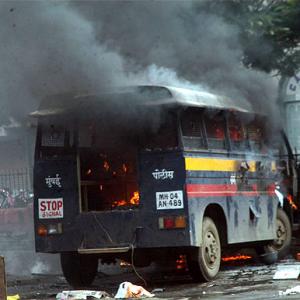