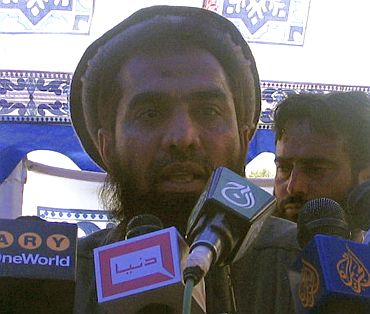 Lakhvi was released from Adiala Jail in Rawalpindi, a day after Lahore high court suspended his detention and ordered his immediate release.

India had strongly reacted to the court’s decision, saying it “eroded” the value of assurances repeatedly conveyed to it by Pakistan on cross-border terrorism.

Union Home Minister Rajnath Singh on Friday said India wants talks with Pakistan but the release of the Mumbai attack mastermind is an “unfortunate and disappointing” development.

“India wants talks with Pakistan but the present development (release of Lakhvi) is unfortunate and disappointing,” he said.

Jamat-ud-Dawa supporters were present outside the prison to receive 55-year-old Lakhvi.

The court on Friday suspended the Punjab government’s order to detain Lakhvi under a security act and ordered his immediate release.

Earlier on Friday, Lakhvi’s counsel Raja Rizwan Abbasi had said that the government was left with no other ‘legal option’ but to release his client.

“The government is left with no other legal option but to release his client after the LHC suspended his detention. Neither the government nor the Adiala Jail authorities can violate the court’s order this time,” he said.

Lakhvi, a close relative of LeT founder and JuD chief Hafiz Saeed, was arrested in December 2008 and was indicted along with the six others on November 25, 2009 in connection with the 26/11 attack case.

“Neither the federal nor Punjab governments can issue another detention order of Lakhvi after the verdicts of the Islamabad High Court and Lahore High Court against his detention as it would be a contempt of court,” Abbasi said.

The government, he said, also could not arrest his client in any other case as the IHC had already stopped it from doing so without bringing the matter to its notice.

The government had arrested Lakhvi for the kidnapping of an Afghan national after the trial court granted him bail on December 14, 2014.

The court had granted him bail in it and directed the government not to register any other case against him without informing the court.

“As the government failed to produce any substantial evidence against Lakhvi it has now no other reasons keep him behind the bars any more,” Abbasi said.

Justice Muhammad Anwarul Haq of Lahore High Court had suspended the detention of Lakhvi under Maintenance of Public Order as the government failed to present “sensitive evidence” against him in the court.

The judge ordered Lakhvi, the petitioner, to submit two surety bonds worth Rs 1 million each for his release.

The government’s counsel presented before the court a record of the sensitive reports prepared by the intelligence agencies about the activities of the petitioner.

However, Lakhvi's lawyers Abbasi told the court that the record presented by the government “was not a secret information and easily available on internet even”.

The court also expressed dissatisfaction over the record and observed that the reasons cited by the government for the petitioner's detention were not enough.

The law officer had submitted important information about Lakhvi but the court did not accept this and declared the evidence unsatisfactory.

The Islamabad High Court on March 13 had suspended the government's detention order for Lakhvi and ordered his immediate release.

The following day the Punjab government (DCO Okara) issued a detention order for Lakhvi for another 30 days under the Maintenance of Public Order, before he could be released by Adiala Jail Rawalpindi authorities.