Source: PTI
Last updated on: June 26, 2012 13:35 IST
The Mumbai police on Tuesday moved a court in New Delhi seeking custody of alleged 26/11 Mumbai terror attack key handler Abu Jundal, who is currently in the custody of the special cell of the Delhi police.

The Crime Branch of the Mumbai police approached the court of Chief Metropolitan Magistrate Vinod Yadav for Jundal's custody in connection with various cases of murder, attempt to murder and other offences under the Indian Penal Code and the Arms Act, which are being probed by Crime Investigation Department, Mumbai.

The court directed the Delhi police to file its reply on the application by Wednesday. "Let the reply to this application be called from investigating officer of the special cell on June 27," the CMM said.

The Mumbai police's application was accompanied by a request letter issued by a Mumbai court for producing 30-year-old Jundal before it.

"In view of letter of Additional CMM 37th Court, Mumbai, it is humbly prayed that direction be kindly issued to produce the accused person (Abu Jundal) before it," the Mumbai police said in its application.

Jundal alias Abu Hamza alias Sayyed Zaibuddin was arrested by the special cell of the Delhi police from Indira Gandhi International Airport in New Delhi and was produced before the CMM's court on June 21. He is currently in the custody of the special cell till July 5.

Jundal has been booked under various provisions of the Unlawful Activities (Prevention) Act, the Explosive Substances Act, the Passport Act and various sections of the IPC.

Jundal, an alleged Lashkar-e-Tayiba operative, is believed to have issued directions from a 'control room' in Pakistan to 10 terrorists who went on a rampage in Mumbai in November 2008, killing 166 persons. He was deported from Saudi Arabia on India's request and was arrested on his arrival at Indira Gandhi International Airport by the Delhi police on June 21.

Jundal allegedly had taught Hindi to 10 Lashker terrorists who carried out the Mumbai attacks in 2008.

A resident of Georai area of Beed district in Maharashtra, he had managed to give a slip to the Mumbai police when an arms consignment in Aurungabad was seized in 2006 and had left for Pakistan.

Along with five others, he was allegedly present in the 'control room' set up in Pakistan and was heard instructing terrorists who were engaged in a fight with NSG commandos at Nariman house, officials associated with the probe have said.

According to police, his presence was also stated by Ajmal Kasab, the lone terrorist arrested during the Mumbai attack, in his deposition before a special court in Mumbai. Kasab had told the court that one person by the name of Abu Jundal had tutored 10 terrorists on how to speak Hindi.

India had also secured an Interpol Red Corner Notice against Jundal in which he was accused of crimes involving the use of weapons, explosives and terrorism. One hundred and sixty six people, including foreigners, were killed in the 2008 attack in Mumbai that also left nine terrorists dead. 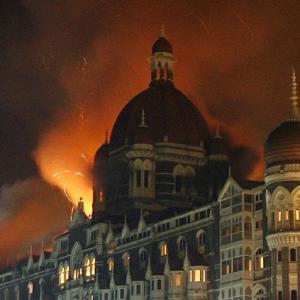