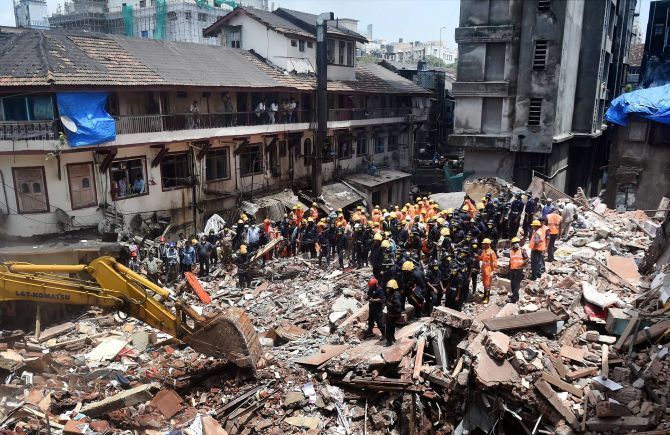 Rescuers on Thursday called off operations at the Mumbai building collapse site believing that no more persons were trapped under the debris, over 24 hours after the tragedy killed 33 people, including a 20-day-old child.

The 117-year-old building in the congested Bhendi Bazar area in south Mumbai came crashing down on Thursday morning, two days after torrential rain brought the maximum city to its knees.

"Rescue operations have been called off as it does not seem that anybody else still remains trapped under the debris. However, some fire brigade personnel along with the police team will remain at the site as a precautionary measure," a senior fire brigade official said.

Personnel of fire brigade, National Disaster Response Force and the civic body have scoured the debris left by the crash of the five-story building, pulling out the dead and injured.

Around 14 people injured in the collapse are undergoing treatment at the state-run J J Hospital, a senior police official said.

"A total of 33 people have died, including a 20-day old male child. Apart from these, 14 are currently admitted in hospital, out which 11 are residents of the building. Two persons are in a critical state," Dr T P Lahane, Dean of J J hospital said.

The dead include 23 men, nine women and a 20-day-old male child, police said.

Earlier in the day, police sources had put the toll at 34, which was later corrected as 33.

The search operations had continued through on Thursday night.

It also housed a play school but children had not arrived yet when the tragedy occurred.

Many suspect the downpour caused further damage to the ramshackle structure, causing its crash.

Some residents in the locality claimed that several families lived in crammed rooms in the structure, which was declared 'unsafe' by the Maharashtra Housing and Area Development Authority.

The Saifee Burhani Upliftment Trust, which was to have undertaken redevelopment of the old structure, said the building housed a total of 13 tenants -- 12 residential and one commercial.

'Of them, the trust had already shifted seven families in 2013-14,' it said in a statement.

'MHADA notices dated March 28 and May 20, 2011, declaring the building dilapidated, were issued along with an offer of transit accommodation to the remaining tenants and occupants,' it said.

The Maharashtra government had announced a solatium of Rs 5 lakh each for the next of kin of the deceased.

Chief Minister Devendra Fadnavis, who visited the site on Thursday, also said that the entire medical expenses of those injured would be borne by the state government.

This was the second major building collapse in the city in just over a month, after the crash of a residential complex in suburban Ghatkopar on July 25, which left 17 people dead.