13/7 blasts: 'Investigators on the verge of cracking case'

Investigators are on the verge of cracking the July 13 Mumbai blasts case, Maharashtra Director General of Police Ajit Parasnis on Sunday said and hoped "very soon things will come out". His remark came a day after he stated the terror group responsible for the blasts had been identified.

"Very soon things will come out. The Anti-Terrorism Squad and crime branch officials have a lot of information and material with them. They also have a fair idea as to which group is behind the blasts but it is not appropriate to reveal the group's name," Parasnis said about the triple blasts probe.

"The announcement may come soon," he replied to a query if the ATS and the crime branch officials, probing the case, are on the verge of cracking the case.

On Saturday, in Kolhapur in western Maharashtra, the DGP had said the group behind the attacks had been identified.

The metropolis was rocked by three bomb blasts -- at Zaveri Bazaar, Opera House and Dadar -- on July 13 during the evening rush hour, killing 27 persons and injuring over 130.

The investigators suspect the role of terror outfit Indian Mujahideen in the blasts and had been probing the case in that direction, police sources said.

The ATS recently arrested two alleged IM operatives Mohammad Haroon and Asrar Tailor in a fake currency case and subjected them to extensive questioning regarding the blasts, they added. 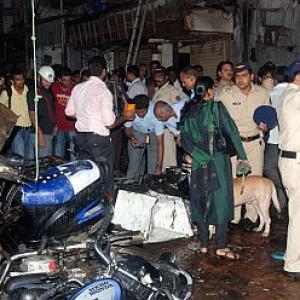 VIDEOS: Eyewitness accounts and the destruction