Braveheart Varsha makes it back from nightmare

For 25-year-old Varsha Karia, July 13, 2011, was like any other day, till she reached Dadar Kabutarkhana in the evening. Ronjita Kulkarni tells her story

July 13 started like any other day for the 25-year-old Varsha Karia. Working in the accounts department of a private company, she took the train to her office in Churchgate in the morning. After work, she got off at Dadar, and started on her daily 15-minute walk to her home near the famous Siddhi Vinayak temple.

But she never made it home.

As she passed a bus stop in Kabutarkhana, the bomb went off. The explosion grievously injured her left arm and right leg, even as flying debris pierced her body.

But Varsha remained in her senses. When a passerby rushed to her assistance, she asked him to call her cousin, Narendra.

The passerby did so, and then rushed her to the nearby KEM hospital in Parel.

Before the telephone rang, Varsha's sister 30-year-old Neha was doing what she usually did on Wednesday evenings -- give tuitions to children. But when Narendra called, her world stood still.

She informed her parents, and her father immediately left for KEM.

Meanwhile, Narendra had also informed Varsha's sister Jigna, 28, who was in office in Parel. Jigna rushed to KEM, where Narendra joined her.

Varsha needed surgery -- her arm seemed to be the worst affected -- and the procedure started at 11 pm, going on till about 3 am.

The night was an especially long one, as Varsha's family was told that the girl was very serious. No one slept, not in the hospital, nor at home.

By morning, doctors gave them hope, and they finally heaved a sigh of relief.

According to a doctor attending to her, Varsha's arm had not been stitched back. They had left the wound open to study it, and make sure that it healed properly. The doctor estimated her time at the hospital to last at least three weeks, if not more.

Narendra's wife Bina describes Varsha as a friendly sort, but emphasises on the fact that Varsha is very brave too. "Despite her injury, she was in her senses to tell someone to call her family for help," she said.

The bravery continued to Thursday morning also, when Varsha spoke to her family well, without complaining about the pain. One look at her, and one would really call it a feat. Lying in the ICU section, most of Varsha seems to be covered in plaster, and medical dressing.

When will Varsha's nightmare end? Only time will tell. 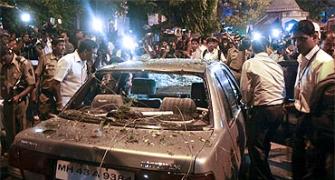 Why ammonium nitrate is so popular with terrorists