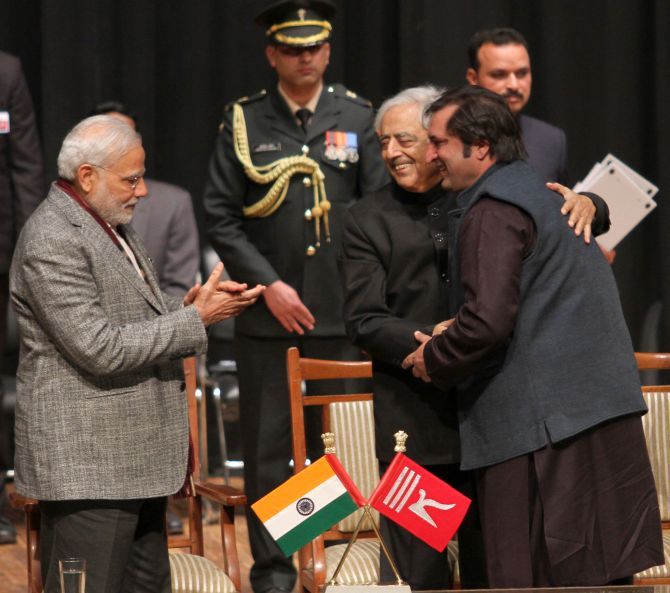 Peoples Democratic Party patron, Mufti Mohammad Sayeed, was Sunday sworn as chief minister of Jammu and Kashmir at a ceremony in the winter capital Jammu which was attended by the prime minister, Narendra Modi and senior BJP leaders.

Ending 49-days of Governor rule, Jammu and Kashmir on Sunday got a new government. Sayeed taking oath as chief minister of a 25-member cabinet which marked the entry of Bharatiya Janata Party for the first time in the state government.

The swearing-in was boycotted by National Conference.

The alliance, which has been termed by Sayeed as meeting of "North Pole and South Pole", saw senior BJP leader Nirmal Singh being sworn-in as a Minister, a historic day for the saffron party in the state as it became part of the government for the first time. He will be the deputy chief minister of the PDP-BJP alliance government.

Sayeed's swearing-in as the 12th chief minister brings to an end to 49 days of Governor's rule imposed on the state since the resignation of Omar Abdullah as chief minister after being voted out of power last December.

It also marks Sayeed's return to the top post after nearly a decade since having led a PDP-Congress coalition government for three years from January 2002.

Lal Singh, who switched sides from Congress to the BJP just before the elections, took oath in Dogri language.

The cabinet saw entry of separatist turned politician Sajjad Gani Lone being sworn-in as the cabinet minister from the BJP quota.

The BJP’s Ram Madhav and the PDP’s Haseeb Drabu led the negotiations leading to the drafting of the CMP.

After the swearing-in, he received a tight-hug from the prime minister.

PDP legislator Haseeb Drabu, who was the chief negotiator from the party in formulating a Common Minimum Programme, was welcomed by the prime minister with all hugs and smiles for making the alliance possible.