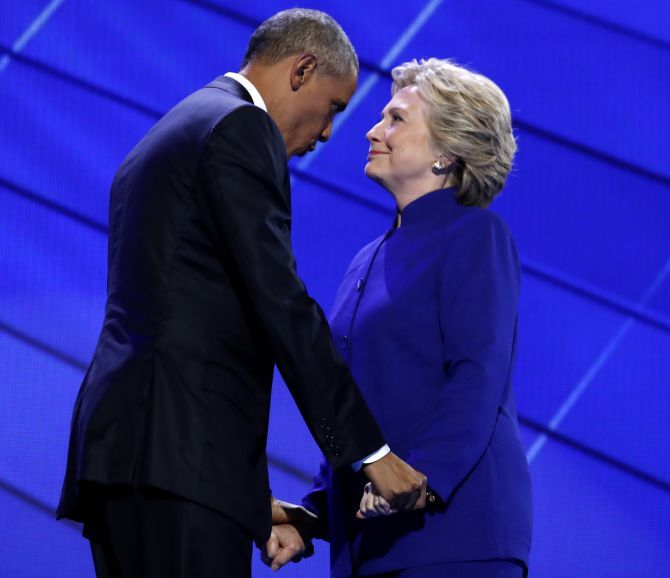 Hillary Clinton apologised to the then President Barack Obama shortly after conceding defeat to Donald Trump on election night, according to a new book.

"Mr President, I'm sorry," Clinton told Obama over phone as her unexpected election loss became a reality, according to a Washington Post review of the book 'Shattered' which is about the Democratic presidential candidate's failed 2016 campaign.

The book 'Shattered: Inside Hillary Clinton's Doomed Campaign' reveals how in a flurry of calls the White House urged Clinton to concede defeat.

"You're going to come up short," Steve Schale, the best vote-counter the Democrats had in Florida, told campaign officials.

The call with Schale marked the beginning of a riveting account of the final, dreadful hours of Clinton's long pursuit of the presidency, as told by reporters Jonathan Allen and Amie Parnes in their insidery new book.

Shortly after 11:00 pm on election night, after Wisconsin was called by Fox News, Allen and Parnes report that the campaign fielded a series of calls from the White House pushing Clinton to concede, even though the margins in many states were extraordinarily close.

President Obama thought it was over and did not want a messy recount.

"POTUS (President of the United States) doesn't think it's wise to drag this out," Simas was quoted as saying.

But as Clinton was dragging it out, she got a call from Obama.

"You need to concede," urged Obama, who repeated the message in a follow-up call to Clinton's campaign chairman, John Podesta, according to the book.

At last, Clinton said, "Give me the phone."

And then the first woman who was going to be president got her opponent on the line and said two words she never expected to say, "Congratulations, Donald."

Moments later, Obama was back on the phone, this time making a consolation call.

This is when Clinton apologised to him as Obama's legacy and her dreams of the presidency lay shattered.

'Shattered' leaves open the question of how Clinton lost.

She and her campaign are convinced that FBI Director James Comey was the pivotal factor -- and there is evidence to support that view.

Comey had publicly announced a reopening of the Clinton email investigation in late October.

But the Comey episode does not address why the race in the reliably blue Rust Belt was so close to begin with or what Clinton could have done to alter it.