Parliamentary Affairs Minister Pralhad Joshi on Friday squarely blamed opposition parties for the ruckus in Rajya Sabha earlier this week and said actions of their MPs like climbing on the secretary general's table and tearing the rule book called for punishment. The opposition should introspect why their MPs, including Congress leader Rahul Gandhi, were absent during the session. Rather than resorting to theatrics, they should have countered the government with numbers, said Joshi.

Those not having any faith in Gandhian principles sat in front of the Gandhi statue to protest on the orders of "naqli (fake) Gandhis", he said in an apparent reference to the Nehru-Gandhi family.

Objecting to the manner in which the farm bills were being passed, opposition members stormed the Well of the House, tore papers, climbed on tables, shouted slogans, and even threw the rule book at Deputy Chairman Harivansh, who was presiding at that time.

Eight opposition MPs were suspended by Rajya Sabha Chairman Venkaiah Naidu on Monday for "unruly behaviour". Protesting the decision, these MPs spent the night in the lawns near Mahatma Gandhi's statue in the Parliament complex.

"It was a black day in the history of independent India and blot on the Opposition," Joshi said.

Standing on the secretary general's table, tearing the rule book, damaging the Chair's mic and attacking the marshals, all these actions of these MPs called for punishment.

"It is strange that those who don't believe in Gandhian principles, which was proved by their conduct in the House, sat on a dharna in front of his statue on the orders of fake Gandhis," he said.

Condemning opposition MPs for attacking Harivansh, Joshi said the Congress and other opposition parties are frustrated with the rise of Prime Minister Narendra Modi and have lost their balance.

Citing the attendance register of Rajya Sabha, Joshi said a large number of opposition members were absent during the discussion on the farm bills in Rajya Sabha.

"Rather than resorting to theatrics, the opposition should have countered the government with numbers," he said, claiming that out of the total 182 members present in the House during the passage of bills, 110 were from the NDA.

"The opposition parties should introspect why a large number of their MPs, including Rahul Gandhi, were absent during the session," he added.

With the blessings of people and under the leadership of Modi ji, the BJP-led NDA will hopefully be able to pass all bills in Rajya Sabha till 2024, Joshi said.

"The opposition cannot dictate terms to us. So for sake of a healthy democracy, they should participate in discussion and cooperate in smooth functioning of Parliament," he said.

The opposition parties had boycotted Parliament proceedings against alleged violation of procedures by the government while passing the farm bills. 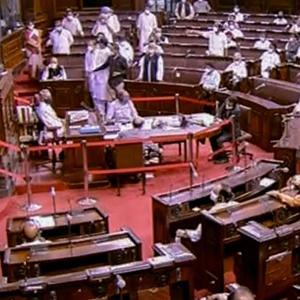