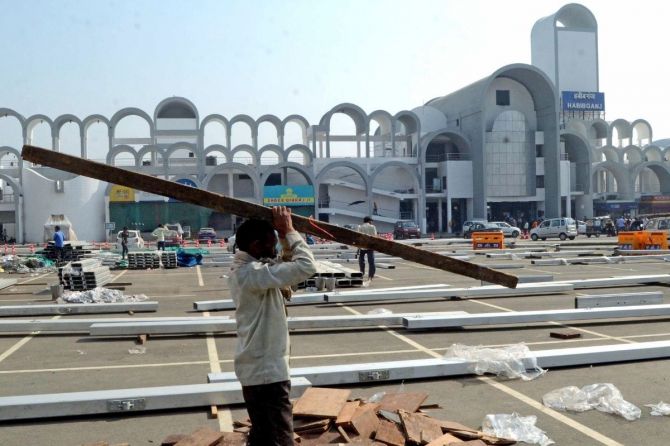 IMAGE: A worker carries an iron rod during the preparation ahead of the inauguration of re-developed Habibganj railway Station, in Bhopal, November 8, 2021. Photograph: ANI Photo

Chouhan hailed Rani Kamlapati as the pride of the Gond community and the last Hindu queen of Bhopal, whose kingdom was usurped by Afghan commander Dost Mohammed by deceit.

Prime Minister Narendra Modi is scheduled to dedicate this renamed railway station, redeveloped with modern airport-like amenities, on November 15, when he is visiting the MP capital to address a tribal convention to mark 'Janjatiya Gaurav Diwas' in remembrance of tribal icon and freedom fighter Birsa Munda.

People of Madhya Pradesh are thankful to the Prime Minister for renaming the Habibganj railway station after Rani Kamlapati, the Gond queen of Bhopal, the CM said in a statement.

He said the PM has enhanced the glory of tribals by renaming the most-modern railway station of the country after the Gond queen.

“Rani Kamlapati is the pride of the Gond community and the last Hindu queen of Bhopal. Her kingdom was usurped by Afghan commander Dost Mohammed by deceit under a conspiracy. When she saw that victory was not possible, she committed 'Jal Jauhar' (a practice of committing suicide) to save her respect,” Chouhan stated.

He said Rani Kamlapati's son Naval Shah had been killed at Lalghati, a part of Bhopal.

The Madhya Pradesh government had on Friday written to the Union Ministry of Home Affairs for renaming the upgraded Habibganj railway station stating that it will honour the legacy and bravery of the widow of the Gond ruler of Nizam Shah.

"She was the last Hindu queen of Bhopal. Habibganj railway station has been named 'Rani Kamlapati' after her. It is a matter of great satisfaction and joy for me. Prime minister shri Narendra Modi I thank you from my heart," Chouhan tweeted.

The Gond community comprises the largest tribal group of India with more than 1.2 crore population.

Rani Kamlapati railway station is located in Bhopal city and part of the West Central Railway.

It is said that Rani Kamlapati was the widow of the Gond ruler of Nizam Shah, the chief of Ginnorgarh.

The Kamlapati Palace overlooking the Upper and Lower lakes in Bhopal is named after the Gond queen.