Eleven people drowned after two boats carrying them capsized during Ganesh idol immersion at a lake in Bhoapl in the wee hours on Friday, a police official said.

IMAGE: State Disaster Emergency Response Force personnel during a search and rescue operation after a boat capsized in the Lower Lake in Bhopal. Photograph: PTI Photo

The incident took place on the intervening night of Thursday and Friday in Khatlapura on the banks of the Lower Lake, Deputy Inspector General of Police Irshad Wali said.

17 people were on the two boats for the Ganesh idol immersion at Khatlapura ghat when the incident took place at around 4.30 am, the collector said.

The first boat tilted and when the people on the other boat one saw it, they tried to save the people on it, but to no avail, the official said.

In the process, the other boat also tilted and both the vessels capsized, the official said.

It shows the boats losing balance as the devotees on board began pushing the idol into the lake water.

It also shows people trying to save their lives by swimming ashore. 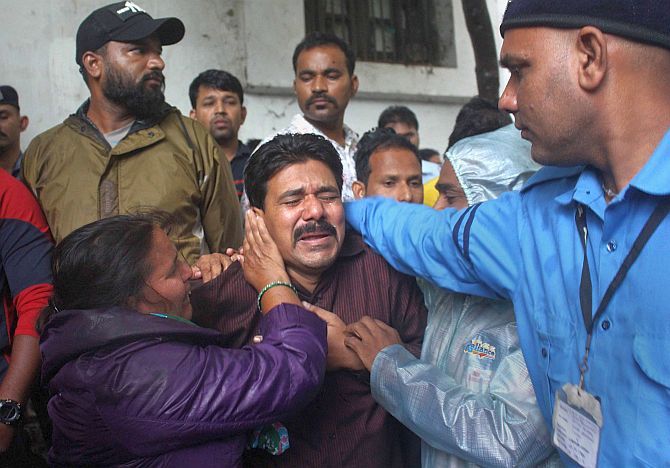 IMAGE: Family members of the victims grieve at the scene where a boat carrying a group of people during the Ganesh idol immersion capsized in the Lower Lake, in Bhopal. Photograph: PTI Photo

The person who is believed to have shot the video said a municipal diver and another person managed to save some of those who fell off the boats.

Prime Minister Narendra Modi expressed grief over the incident, saying his thoughts are with the families of those who died.

'The capsizing of a boat at Khatlapura Ghat in Bhopal is saddening. In this hour of grief, our thoughts are with the families of those who lost their lives,' the Prime Minister's Office tweeted quoting Modi.

Chief Minister Kamal Nath ordered a magisterial inquiry and a compensation of Rs 11 lakh each to the kin of the deceased, while police registered a case against the two boatmen.

One Tamar Rana, who was among those rescued, said safety equipment was not provided to those venturing into the lake to immerse idols.

He said the two boatmen asked more people to come on board to maintain the balance as the boats sailed carrying the idol.

A Jahangirbad police official said the two boatmen Akash Batham and Changu Batham have been charged under Section 304A (causing death by negligence) of the Indian Penal Code.

The Bhopal Municipal Corporation announced relief of Rs 2 lakh each to the kin of the deceased, while an ex gratia of Rs 4 lakh, including an immediate relief of Rs 50,000, was declared by the collector.

Additional DG of the State Disaster Response Force D C Sagar said rescue operations at the site would continue till the police are sure that no more persons are missing.

The boats were taken out with the help of cranes, he added.

Chouhan accused the administration of criminal negligence, and said the kin of the dead should be given compensation of Rs 25 lakh and one person per family should be provided a government job.

At least 18 persons drowned in separate incidents during immersion of Ganesh idols across Maharashtra, police said on Friday.

Immersions, which began on Anant Chaturdashi on Thursday, continued into Friday morning in several parts of Mumbai, Pune and Sangli, officials said.

The deaths include four in Amravati, three in Ratnagiri, two each in Nashik, Sindhudurg and Satara, one each in Thane, Dhule, Buldhana, Akola and Bhandara.

In neighbouring Thane, a 15-year-old boy, identified as Kalpesh Jadhav of Kasara, drowned while immersing a Ganpati idol.

Meanwhile, bodies of two men and as many women who drowned during immersion were recovered from near Palla Bakhtawarpur village in New Delhi in the early hours of Friday, according to the Delhi Fire Service.

The fire department received information regarding the drowning incident at 8.58 pm on Thursday, officials said.

One fire tender was rushed to the spot and the rescue operation was initiated.

The bodies of two men and two women were recovered, the officials said.