2 tribal men lynched in MP on suspicion of cow slaughter

Two tribal men died after they were allegedly assaulted by a group of 15-20 people over suspicion of cow slaughter in Madhya Pradesh's Seoni district, police said on Tuesday. Another person was injured in the incident, they said.

The complainant in the case and the opposition Congress in the Bharatiya Janata Party-ruled state have alleged the attackers belong to the Bajrang Dal.

Some 20 people have been booked in connection with the incident, which took place at Simaria under Kurai police station limits between 2.30 am and 3 am on Monday, including six on charges of murder, an official said.

After the incident, a group led by Congress legislator Arjun Singh Kakodia started a protest on the Jabalpur-Nagpur highway.

The Seoni Superintendent of Police and other officials visited the protest site.

"Two tribal men have died. It was alleged a group of 15-20 people went to the victims' house, accused them of killing a cow and assaulted them. The two men died while being taken to hospital and another sustained minor injuries. A postmortem is yet to be conducted," Additional Superintendent of Police S K Maravi told PTI.

"A case of murder has been registered at the Kuarai police station and police teams are searching for the accused. Some of the accused are named (in the complaint) and others are unidentified. We have taken 2-3 suspects into custody. Some 12 kilograms of meat has been found in the victims' house," Maravi said.

The complainant Brajesh Batti, who was injured in the incident, said the mob was hitting Sampat Batti, a resident of Sagar, and Simaria resident Dhansa with sticks when he arrived at the spot, and he, too, was assaulted.

Congress MLA Kakodia, who has been sitting on a 'dharna' to protest the incident, claimed the attackers comprised Bajrang Dal members and called for a ban on the right-wing outfit.

He said the kin of the victims should be given Rs 1 crore each as well as government jobs.

Meanwhile, the Congress has demanded a high-level inquiry into the incident and swift action against the culprits.

MP Congress president Kamal Nath tweeted, 'I demand from the government that strict action be taken against the culprits by announcing a high-level inquiry into this incident. All possible help should be given to the families of the victims and arrangements for treatment of the injured man at government expense.'

Nath said the kin of the deceased and local residents have claimed the Bajrang Dal was involved in the incident. 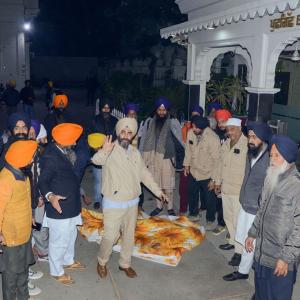