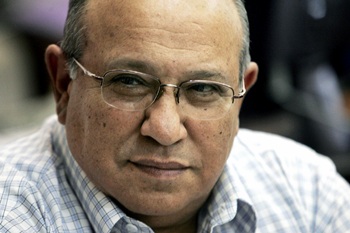 Based on information obtained from "sources with knowledge of Mossad," London-based Sunday Times reported that Netanyahu gave green light for the 'Dubai operation' to Mossad chief Meir Dagan (see the picture) during a meeting at the Midrasha, the intelligence agency's headquarters, in early January.

Times said when Netanyahu was briefed about the operation some members of a hit squad were also present in the room.

"As the man who gives final authorisation for such operations, Netanyahu was briefed on plans to kill Mahmoud al-Mabhouh, a member of Hamas, the militant Islamic group that controls Gaza," the newspaper reported.

It said Mossad had received intelligence that Mabhouh was planning a trip to Dubai and they were preparing an operation to assassinate him there, off-guard in a luxury hotel.

"The mission was not regarded as unduly complicated or risky, and Netanyahu gave his authorisation, in effect signing Mabhouh's death warrant.

"The team had already rehearsed, using a hotel in Tel Aviv as a training ground without alerting its owners," the report said.
"Typically on such occasions, the prime minister intones: 'The people of Israel trust you. Good luck.'," the Times reported.

Mabhouh was assassinated in a Dubai hotel on January 20 and Dubai police had suspected the involvement of Mossad in the killing.

Another British daily, The Daily Mail, said Netanyahu personally congratulated members of the Mossad team that allegedly killed Mabhouh ahead of their departure to Dubai.

The Mail reported that Mossad assessed the mission as not unusually risky or complicated.

"The operative teams were very much aware of the CCTV in Dubai, but they have been astonished at the ability of the Dubai police to reconstruct and assemble all the images into one account," an unnamed Israeli source was quoted by the paper as saying.

Israel's Deputy Foreign Minister, Danny Ayalon, yesterday said that he does not expect relations between Israel and European countries whose passports were used in the assassination to deteriorate as a result of the incident.

"I do not expect a crisis in relations because there is nothing linking Israel to the assassination. Britain, France and Germany are countries with shared interests with Israel in countering terrorism," Ayalon said, naming three of the four countries whose passports were used.

At least three of the suspects are said to have used Irish passports. Israel has maintained the policy of neither confirming nor denying responsibility for such operations whenever the international media has pointed fingers at Mossad to have carried out such hits.