Moscow bomber may have been blown by remote control: Report

Source: PTI
January 29, 2011 17:09 IST
The suicide bomber, who attacked Moscow's international airport killing 35 people, could have been blown through a remote control by one of his accomplices who might have thought that he would back out at the last minute, a media report said on Saturday.

Quoting unnamed experts involved in the probe, Kommersant, Russia's business daily reported that molten circuit boards found after the January 24 blast at the Domodedovo airport indicated that a cellphone was embedded in the plastic explosives used in the attack. It said that the behaviour of the terrorist, who hesitated for sometime, also backed this theory.

A closed-circuit television footage showed that suicide bomber nervously walked around in the arrival zone of the airport for about 15 minutes before the blast. "It's possible that one of his accomplices, thinking he would not press the button, remotely blew him up by making a phone call on the cell phone embedded in the bomb," an investigator was quoted as saying by the daily.

The Kommersant said the plastic bomb was strapped around the waist of the suicide bomber in the form of a champion boxer's belt and not in the bag as reported earlier. It also said the investigation is probing the role of a woman standing next to him at the time of the blast, which sparked speculation about involvement of a 'black widow' of a slain militant from the restive Northern Caucasus region.

So far, nobody has claimed the responsibility for the attack, which has led to dismissal of several top police officials directly or indirectly responsible for the security at the airport.

Earlier an ethnic Russian Yuri Razdobudko was named as the suicide bomber, who had embraced Islam and joined the Nogai Jamaat terrorist group disbanded in October. However, the DNA tests failed to confirm the police theory.

Although he was declared dead in October in the operation to liquidate the Nogai Jamaat, the police had relaunched the search for Razdobudko, who was said to have undergone training in the Pakistani camps. Local media reported that the Federal Security Service had sought information on Razdobudko from Islamabad. 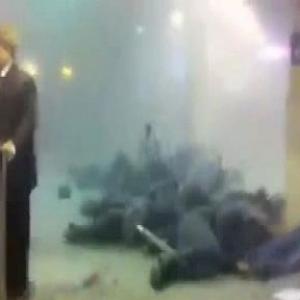