Does Prime Minister Dr Manmohan Singh want to capitalise over the craze between the high-voltage World Cup semi-final between India and Pakistan? If high-level sources are to be believed the answer is yes. One of the options that the governments of both nations are considering is to have more cricket matches between the two-arch rivals, sources told rediff.com.

Even as the cricket match is in progress at Mohali, India and Pakistan's diplomatic teams are trying to check the possibility of having a game in Sharjah with the active involvement of the Board of Control for Cricket In India. A decade back matches in Sharjah were hit in the subcontinent and were a big spectacle.

Another option, which is being looked at by diplomats, is to organise one match in India, the other one across the border and a third one in Sharjah. Security is currently a major concern and is the sole reason why Pakistan is not hosting the World Cup along with other nations in the sub-continent.

However, instead of going public on the bigger and graver issues like Afghanistan, 26/11 and cross-border terrorism, it's believed that more cricket may be a help in avoiding stagnation of bilateral ties between the two countries.

Diplomatic circles, also, claim that although both sides have underplayed the meeting between the two prime ministers, both leaders will be talking about other issues as well. Last year, Dr Singh had accepted a invitation to visit Pakistan. And, it's highly possible that in the coming months an atmosphere will be created to put to test if the proposed visit is advisable.

While explaining the importance of Wednesday's diplomatic event, a senior serving diplomat dealing with Pakistan told rediff.com, "Dono sofa pe baithenge to baate to karnege. (If both PM's share a sofa they are bound to talk.)"

"The bilateral talks got a head start in Thimpu. Already both sides have a framework within which the home secretaries have held dialogue and commerce secretaries and foreign secretaries will be doing the same. So, the meeting of PM's will only give a firm signal to everybody around that both nations are will to take the peace talks forward."

On Wednesday at 9.15 pm, Foreign Secretary Nirupama Rao is expected to address the media, an indication that something may be brewing. 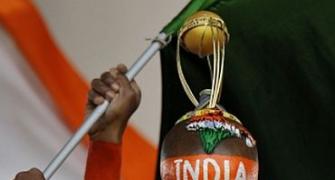 Mohali Madness: Just being essentially Indian
From sport to spectacle and tamasha
Gilani to hold bilateral talks during India visit