Bad weather on Wednesday hampered the recovery of scores of bodies and the wreckage of the AirAsia plane that drifted away from the crash site due to strong tides in the JavaSea off Indonesia after sonar images identified what appeared to be large parts of the jet.

The massive hunt for the 162 people on board the Singapore-bound AirAsia flight QZ8501 that went missing on Sunday after taking off from Surabaya, Indonesia, was severely limited due to heavy rain, wind and thick clouds.

Seven bodies, including that of a woman flight attendant still wearing her AirAsia uniform, have been recovered, said Indonesia's Search and Rescue Agency chief Bambang Soelistyo. 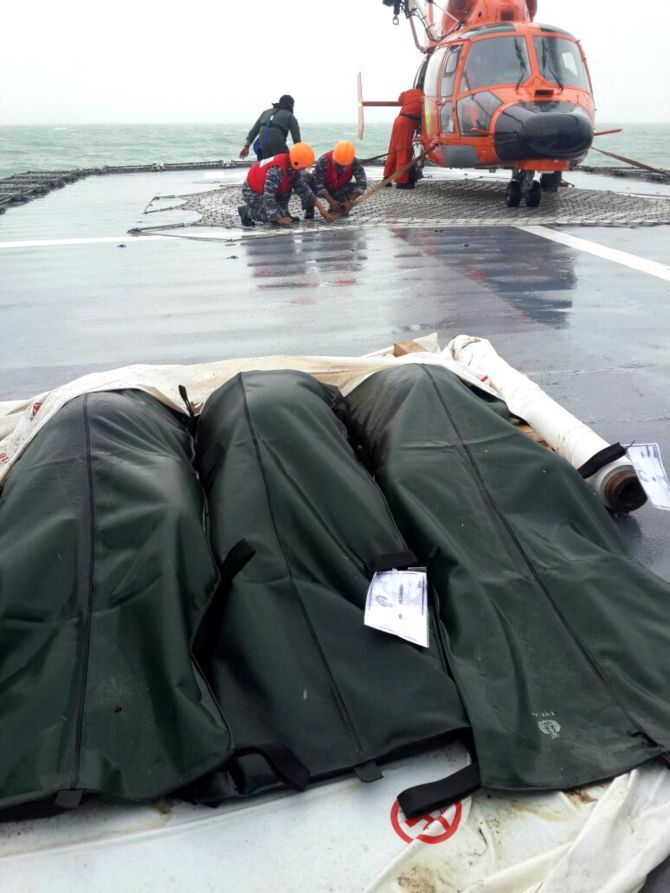 A Basarnas helicopter is seen behind three covered bodies recovered from the AirAsia plane, on the deck of KRI Bung Tomo warship off the Java Sea, Indonesia. Photograph: Lettu Solihin/ Reuters

Divers were to be deployed to search for bodies and for the plane's "black box" flight recorders but officials said heavy rain, strong winds and waves of up to 3 metres had forced them to suspend the operation.

Sonar images identified what is believed to be large parts of the plane, but strong tides were moving the wreckage.

"It seems all the wreckage found has drifted more than 50 kilometers from Tuesday's location," said Vice Air Marshal Sunarbowo Sandi, search and rescue coordinator in Pangkalan Bun on Borneo Island. "We are expecting those bodies will end up on beaches," he added.

Indonesian rescuers have recovered various bits of debris, including luggage, and seven bodies floating in shallow waters off Borneo. The first two bodies from the AirAsia plane crash arrived back in Surabaya, where relatives of those on board the ill-fated Airbus A320-200 are waiting.

Soldiers acting as pall bearers carried coffins containing the two bodies. The next of kin have been asked for DNA samples to help identify the victims.

Nearly three days after the Singapore-bound plane went off the radar; its debris was found yesterday in the KarimataStrait near Pangkalanbun, Central Kalimantan.

Many bodies were seen floating in the sea by the rescuers and efforts were being made to retrieve them, officials said. 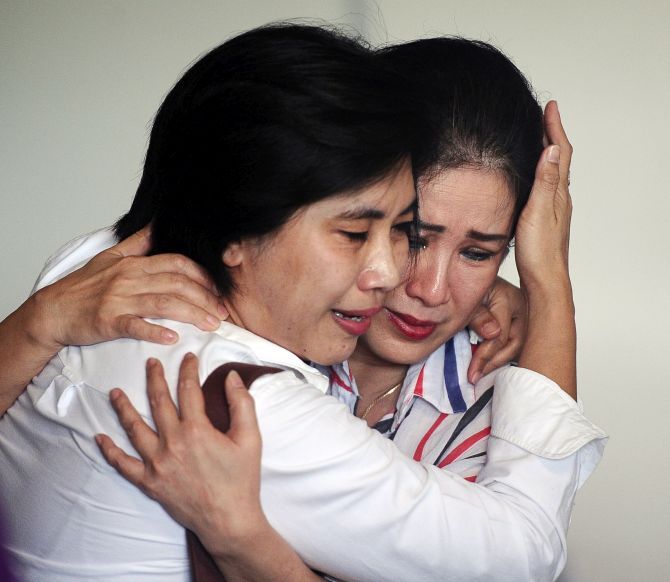 Relatives of passengers on AirAsia flight QZ 8501 react to the news of debris and bodies being found. Photograph: Robertus Pudyanto/Getty Images

One of the bodies pulled out on Tuesday was dressed in air stewardess uniform, said Bambang Soelistyo, chief of Indonesia's search and rescue agency Basarnas.

Many bodies were seen floating in the sea by the rescuers and efforts were being made to retrieve them, officials said.

However, the efforts to locate victims and wreckage of the plane were hampered by stormy weather and strong tides.

Divers were to be deployed to search for bodies and for the plane’s black box flight recorders but officials said heavy rain, strong winds and waves of up to 3 metres had forced them to suspend the air operation, though ships already in place were continuing the search. 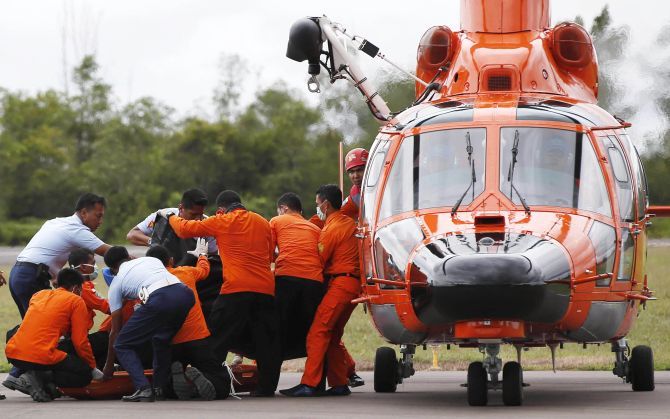 Indonesian Search and Rescue crews unload one of two bodies of AirAsia passengers recovered from the sea, at the airport in Pangkalan Bun, Central Kalimantan. Photograph: Darren Whiteside/ Reuters

"We are in a wait and see. Weather is bad currently. High tides and heavy rains. Every element is now in their position ready to make a move when weather improves," Soelistyo said.

"As soon as the weather is clear, the bodies will be brought to Pangkalan Bun," he said.

Indonesian officials on Tuesday confirmed that remains and debris found in the waters off Borneo are from the AirAsia plane. 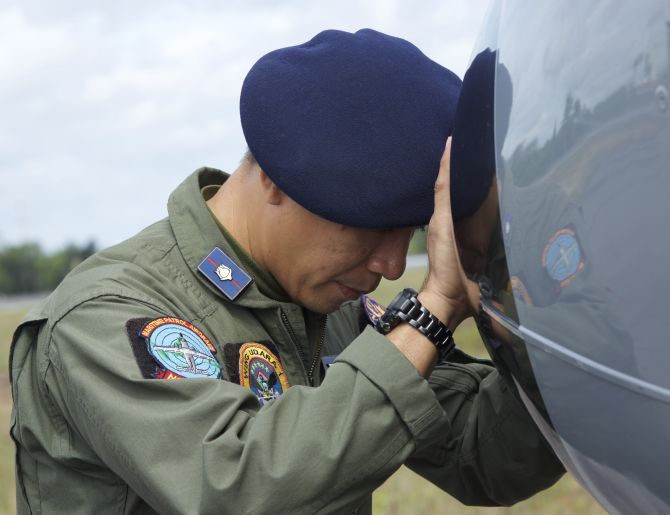 Indonesian President Joko Widodo has promised a “massive search by the ships and helicopters” with the focus on recovering the bodies of victims. Widodo has inspected the crash location from the C-130 Hercules aircraft.

“I feel the loss from this tragedy and we all pray for the families to be given fortitude and strength,” he said, speaking in Surabaya, from where the plane had taken off on Sunday morning for Singapore.

Indonesian officials on Tuesday confirmed that remains and debris found in the waters off Borneo are from the AirAsiaplane that took off from Surabaya for Singapore.

Relatives of the 162 people on board the ill-fated plane hugged each other and burst into tears on Tuesday as they watched television footage of bodies floating in the sea. 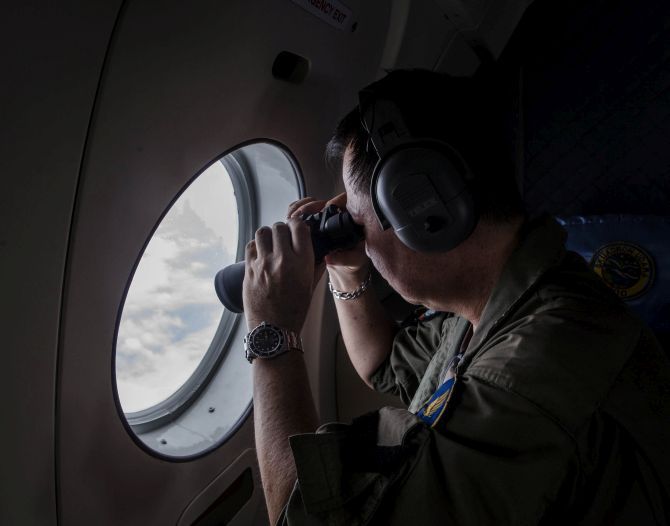 A member of the search team looks out over the waters of the Java Sea near Pangkalan Bun, Kalimantan . Photograph: Ulet Ifansasti/Getty Images

The plane was carrying 155 passengers -- one British, one Malaysian, one Singaporean, three South Koreans, 149 Indonesians -- and seven crew members -- six Indonesians and a French co-pilot.

Seventeen of the passengers were children. There were no Indian nationals on board.

The mystery still remains over why the plane lost contact with air traffic control and what happened afterwards.

Families of people aboard AirAsia plane have been briefed by officials that sonar technology has "spotted the plane on sea floor," a relative of some of the passengers said.