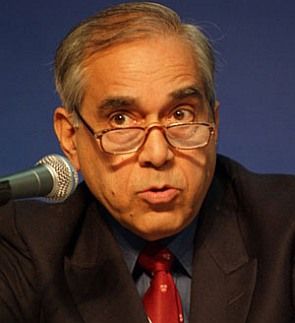 Prime Minister Narendra Modi's Principal Secretary Nripendra Misra has decided to step down from his post after serving as a key aide of Modi for over five years.

Misra has been asked by the prime minister to continue for two weeks, principal government spokesperson Sitanshu Kar said on Friday.

Modi has appointed P K Sinha, who superannuated as cabinet secretary on Friday, as Officer on Special Duty (OSD) in the Prime Minister's Office (PMO), he said.

Describing Misra, a 1967-batch retired IAS officer of Uttar Pradesh cadre, as one of the most outstanding officers, Modi said, "When I was new to Delhi in 2014, he taught me a lot and his guidance remains extremely valuable."

Conveying his best wishes to the 74-year-old retired bureaucrat for the 'new phase' of his life, Modi said, "After serving the PMO assiduously and diligently for over five years and making an indelible contribution to India's growth trajectory, Shri Nripendra Misra Ji will be embarking on a new phase of his life. My best wishes to him for his future endeavours."

In a statement, Misra said it has been a privilege for him to serve the country under Modi.

"I am deeply grateful to him for this opportunity and the complete confidence he has placed in me," he said.

He said he enjoyed working, committing his every hour and thought for more than five years towards a satisfying journey.

"It is now time for me to move on, even as I remain devoted to public causes and national interest. I thank all colleagues, within and outside the government, friends and my family for this support. I wish Shri Narendra Modi Ji, our prime minister, success as he leads our country into a bright future," he said.

Misra has been in the PMO since 2014 after Bharatiya Janata Party-led National Democratic Alliance came to power and Modi became the prime minister.

He was reappointed as the prime minister's principal secretary with a rank of a cabinet minister after the Modi government returned to power in the 2019 Lok Sabha elections.

After serving in various capacities in the government, Misra had retired as the chairman of the Telecom Regulatory Authority of India (TRAI) in 2009.

Misra was appointed in the PMO in 2014 after the government promulgated an ordinance to amend the TRAI Act that could have prevented him from getting the key post.

The TRAI Act prohibits its chairman and members from taking up any other job in the central or state governments after demitting office.

A powerful officer in the PMO, Misra was responsible for coordinating with ministries, and implementing key policy decisions of the government.

In a series of appointments, the PMO inducted five officers, including a joint secretary, three deputy secretaries and a director on Friday.

Following the high-profile changes, the Appointments Committee of the Cabinet (ACC), led by the prime minister, inducted IAS officers Arvind Shrivastava and Hardik Satishchandra Shah as the joint secretary and deputy secretary respectively in the PMO.

Shrivastava, a 1994-batch IAS officer of the Karnataka cadre, is currently serving as joint secretary in the Department of Economic Affairs, Ministry of Finance.

He played a crucial role in the preparation of the annual general budget this year.

In a separate government order, the ACC appointed Shah, a 2010 batch IAS officer of the Gujarat cadre -- presently posted as private secretary to Environment Minister Prakash Javadekar -- as deputy secretary in the PMO.

The Competent Authority also cleared the appointment of Abhishek Shukla, Pratik Mathur -- both Indian Foreign Service officers of the 2006 and 2007 batches respectively -- as deputy secretaries and Saurabh Shukla, Indian Audit and Accounts Service of 2005 batch as the director in the top office, the government order said.