Prime Minister Narendra Modi on Monday interacted with a cross-section of members of the Indian diaspora in Scotland who gathered here to felicitate him and also unveil his bust. 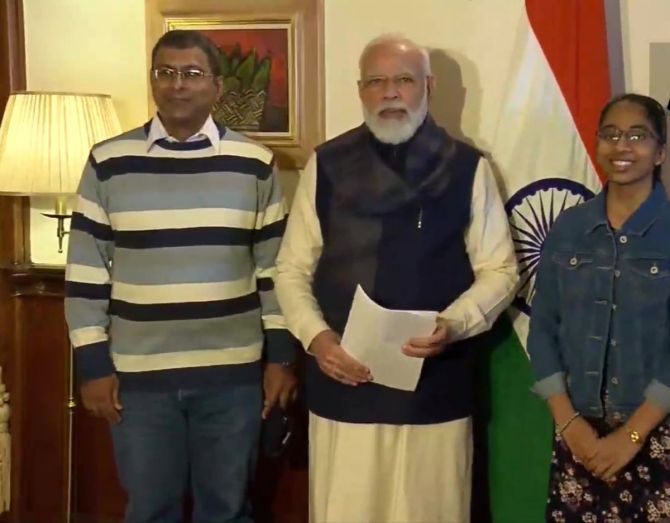 Modi, who arrived in Glasgow on Sunday night to cheers from a group of diaspora delegates, had a special interaction with members of the Indian community based in Scotland before he left for the opening ceremony of the COP26 climate summit.

A Scotland-based medic Dr Nadey Hakim presented the Prime Minister with a bust, which was formally unveiled during the interaction. Modi also gave him his specs to be put on the bust.

"I have done the sculpture of the Prime Minister. As you can see he is quite a popular gentleman. Everyone likes him. I really liked his features and I decided to do it and I have to say I am very thrilled by his reaction," Hakim said after the interaction.

Hakim said that when somebody asked where the glasses were, he improvised at the last minute and "took off his (Modi's) own glasses and put them on, which I thought was a good move."

"He was happy I believe and I hope everybody from India and elsewhere would like the features and hopefully find that this is complementary to what the prime minister looks like," Hakim said.

Hakim said that the Prime Minister "automatically, immediately made me feel at ease to speak to him like a brother really."

His interaction with community leaders involved a meet and greet with around 45 Indian diaspora representatives from Glasgow and Edinburgh, including prominent medics, academics and business people.

Pam Gosai, who was part of the diaspora who met Modi, said, "I am the first Indian Sikh lady in the Scottish parliament. It is fantastic to see the Prime Minister here in Glasgow at COP26 amongst all the world leaders together."

"I think the prime minister is absolutely right when he says 'one world one initiative' and that is why today all leaders are coming together to make sure we all come together and coming from a Sikh background we have Ek Omkar, which means there is one god," she said.

Manjulika Singh, yoga teacher and President of the Scottish Indian cultural Festival Committee Chair Ethnic minority Forum (SCIFC), said that she wants to thank Prime Minister Modi for the popularity of yoga across the world.

"He is an amazing Indian leader, who has really put India on the top which we all appreciate," she said.

Dr Vipin said that he was delighted to meet Prime Minister Modi.

The prime minister's interaction was scheduled just ahead of the opening ceremony of day one of the World Leaders' Summit of the 26th Conference of Parties (COP26) to the United Nations Framework Convention on Climate Change (UNFCCC), being hosted by British Prime Minister Boris Johnson at the Scottish Event Campus (SEC) in Glasgow.