Declaring that even Mahatma Gandhi wanted the party dismantled, Prime Minister Narendra Modi on Tuesday said there would have no Emergency, no massacre of Sikhs, no caste politics and no exodus of Pandits from Kashmir had the Congress not been there. 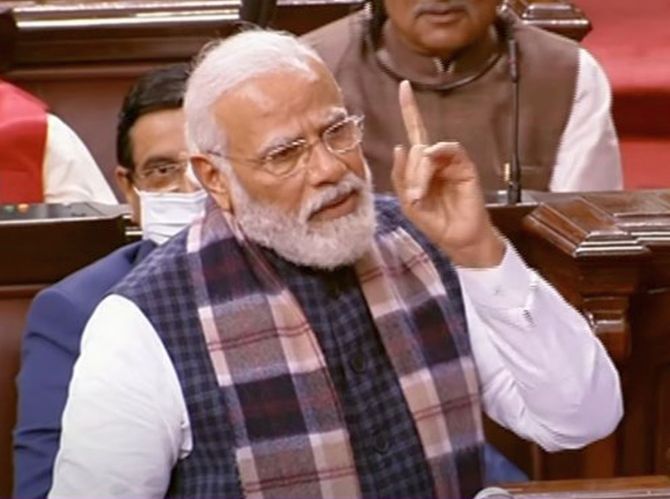 Replying to the debate on the motion of thanks to the president's address in the Rajya Sabha, the prime minister, who also highlighted his government's achievements, launched a blistering attack against the Congress and alleged that 'urban Naxals' had control over the party.

"The Congress in a way is in the grip of urban Naxals. That is why its thought has become negative," Modi alleged in his 90-minute speech.

Congress speech amid cheers from the treasury benches.

The Rajya Sabha adopted the motion of thanks after negating all amendments moved by opposition members.

The Congress staged a walkout from the House during the prime minister's address, prompting Modi to say that one needs to listen too in a democracy and that the party was used to only preaching to others till now.

The prime minister rejected accusations of altering history and said he was only refreshing the memory of some whose histories began only 50 years ago and whose histories were confined to that of a particular family.

The Congress, he added, delayed Goa's independence by 15 years until after India attained freedom.

Modi also listed instances of past Congress governments muzzling the freedom of expression and cited Lata Mangeshkar's musician brother Hridaynath Mangeshkar being sacked from All India Radio for presenting a poetry on Veer Savarkar.

Whenever someone within the Congress has spoken against a particular family, the results have been there for all to see, the prime minister said, naming the late Sitaram Kesri.

Kesri, who spoke out against the Gandhi family, was removed as party president.

Referring to Leader of opposition Mallikarjun Kharge, Modi said, "I was surprised when he asked what would have happened had the Congress not been there...This democracy is not courtesy your patronage."

Those who throttled democracy in 1975 have no right to talk about democracy, the prime minister said, adding that tradition of debate is age old in India.

When a family is supreme in any party, he said, the first casualty is talent.

"For ages, India has suffered because of this mindset. I appeal to all parties to nurture democratic values within and the Congress, as the oldest party, should assume greater responsibility in this regard."

Modi accused the Congress of not letting India develop when in power and of 'stalling India's development when in the opposition'.

Without naming Congress MP Rahul Gandhi, who recently said in the Lok Sabha that the Constitution mentioned 'India as a Union of States and not a nation', the prime minister said if the Congress felt the conceptualisation of the nation was unconstitutional, it should change its name from Indian National Congress to Federation of Congress.

He also urged the party to not impose its frustration and despair on the people of the country as loss and victory happen in politics.

Responding to the Congress, the Trinamool Congress and the Left on the union government's approach to federalism, Modi said past Congress governments imposed President's Rule to dismiss over 50 duly elected state governments.

Without naming the late Rajiv Gandhi, he recalled the sacking of then Andhra Pradesh chief minister T Anjaiah only because Gandhi disliked the protocol arrangements for his arrival at the airport.

He listed several occasions where Congress governments either dismissed or attempted to destabilise state governments.

"We are not small minded like the Congress. We don't see any conflict between national goals and regional aspirations. We believe that the progress of states is the first condition for the progress of the nation," he said.

Modi also criticised some parties that created negativity during Covid times and said they even boycotted an all-party meeting on the issue.

"Have faith in the capability of 130 crore people of India, who will take the country forward with their talent," he said, adding that the nation was now entering a golden period.

Highlighting the achievements of his government during the pandemic, Modi said it was able to control inflation despite high international prices and amid the pandemic.

He claimed that while the United States has faced highest inflation in 40 years and the United Kingdom in the last 30 years, India has controlled price rise.

He said inflation has remained between 4-5 percent during the last six years, while it was in double digits during the United Progressive Alliance rule.

Though other countries are facing high inflation and slow growth, India is witnessing high growth and medium inflation and has become the fastest growing economies among developing countries, Modi said.

The GST Council and Covid management, he said, were perfect examples of federalism as all decisions taken in the Council were unanimous. Modi added that he held 23 meetings with chief ministers during the Covid pandemic.

He also claimed that the country was among the top three in the setting of unicorns and credited the youth for the achievement.

He listed various steps taken by the government, including provision of free foodgrains to over 80 crore people.

The prime minister stressed that the infrastructure sector, besides MSME and agriculture, were accorded top priority to help generate employment opportunities.