Prime Minister Narendra Modi will on Wednesday attend a public function on laying of the foundation stone of 'Shree Ram Janmabhoomi Mandir' at Ayodhya, the Prime Minister's Office said. 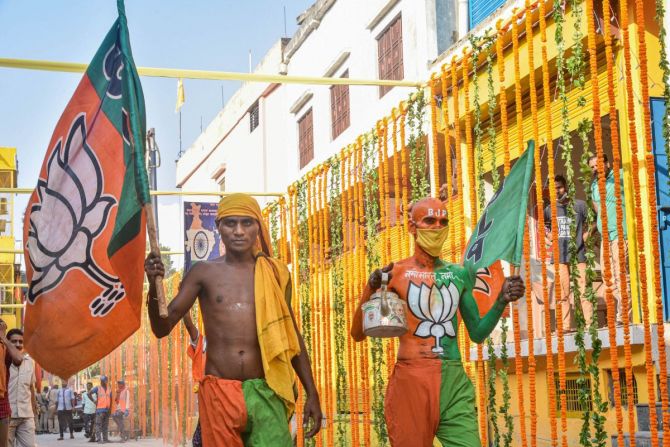 IMAGE: BJP workers holding their party flag walk along a decorated street, on the eve of the groundbreaking ceremony of the Ram Mandir, in Ayodhya, on Tuesday. Photograph: PTI Photo

Prior to the function, the prime minister will take part in 'pooja' and 'darshan' at Hanumangarhi, a statement by the PMO said on Tuesday.

From Hanumangarhi, he will travel to 'Shree Ram Janmabhoomi' where he will take part in pooja and darshan of 'Bhagwan Shree Ramlala Virajman'.

He will also plant a Parijat (Indian night jasmine) sapling.

He will unveil a plaque to mark the laying of foundation stone and also release a commemorative postage stamp on 'Shree Ram Janmabhoomi Mandir', the statement further said.