Strategy or confusion? The Tamil Nadu BJP has many reasons to feel let down by Prime Minister Modi’s whistlestop tour to the state on Tuesday, says R Ramasubramanian. 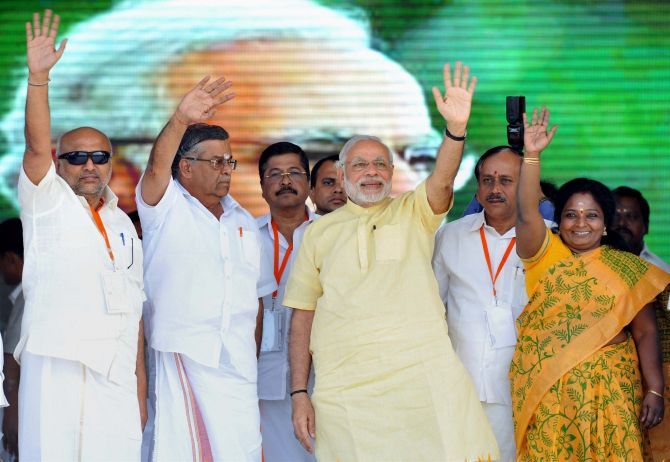 Prime Minister Narendra Modi’s much anticipated Coimbatore visit on February 2 has failed to remove the electoral anxieties of the Tamil Nadu unit of the Bharatiya Janata Party.

Both the BJP and the rest of the opposition had believed that the prime minister will virtually sound the poll bugle on February 2. In fact the BJP had touted in so many words that the prime minister’s speech would be the grand launch of sorts of the party’s election campaign. Tamil Nadu goes to the assembly polls along with West Bengal, Kerala, Assam and Puducherry in April-May this year.

Though Modi played the Dalit card by referring to Rohith Vemula’s death, his silence about Tamil Nadu politics was indeed the major takeaway from his visit. Modi did not mention even once the name of either the ruling All India Anna Dravida Munnetra Kazhagam or the main opposition in the state the DMK in his speech. Rather, he kept attacking the Congress as though the party is a major player in the state.

Both the BJP and Congress are marginal players in the state, with the former enjoying around two per cent vote share and the latter having around four pc. At a time when the local BJP was expecting some sort of an indication from its top leader about the possible alliances, his speech could have only come as a letdown.

“They are absolutely clueless, and don’t know what to do. In the 2014 elections the Marumalarchi DMK, Pattali Makkal Katchi and Desiya Murpokku Dravida Kazhagam and a few smaller parties were with them. Today not one of them is with them,” says a senior journalist covering the BJP affairs in the state.

There was wide expectation that the prime minister will, if not announce his party’s poll strategy, at least mention the broad parameters of the alliances in the state. But Modi kept mum on it, and rather just glossed over the topic, which came as a disappointment after the state BJP itself had trumpeted that the PM will sound the poll bugle in Coimbatore.

The only excitement in an otherwise dull moment was injected by senior BJP leader Subramanian Swamy who tweeted during Modi’s rally that since M Karunanidhi will not be the CM candidate this time, Stalin will take over the mantle and it’s time for the BJP, DMK and Vijaykanth to come together for the assembly elections.

While some dismissed this as nothing more than a storm in a tea cup, others say that nothing can be ruled out in today’s political scenario in the state, since both the DMK and AIADMK were once the electoral partners of the BJP.

Some observers even compared this with an open call given by DMK president M Karunanidhi three weeks ago that all political parties were welcome to join him to defeat the Jayalalithaa government in the state.

“We have to link this too. Karunanidhi had given an open call and he did not mention words like secular parties, etc and just said ‘all parties’. Today Modi did not take the names of either the DMK or the AIADMK. On the other hand, Swami is tweeting about a possible DMK-BJP-DMDK alliance, so nothing is ruled out,” says Gnani Shankaran, a senior journalist.

There is a third crop of observers who view Swami’s tweet to actually be aimed at disturbing Jayalalithaa and nudging her towards the BJP for an electoral tie-up in the state.

The uncertainty apart, the choice of topics at Modi’s rally is also worrying a tiny section of the BJP who are in the know of things. “It’s Coimbatore, an area where dominant castes like Kongu Vellalars are asserting their supremacy over Dalits and are calling the shots. The under-current is very strong. A political outfit representing the Kongu Vellalars was a constituent of the NDA in the 2014 Lok Sabha elections but now it has jettisoned the BJP. That the prime minister choosing to talk about Dalit issues in this belt is really puzzling. Usually Modi is famous for choosing his topics as per local conditions,” says a BJP leader with RSS background from the state who has now been sidelined in the party apparatus.

“The lack of proper inputs and lack of proper understanding on ticklish issues on the part of state BJP leaders and the prime minister’s advisers are adding to the woes of the saffron party in the state,” this leader further adds.

Today the BJP is not only a loner in the state but also absolutely clueless about a strategy to choose potential alliance partners. In spite of enjoying a majority at the Centre, the party was not able keep its flock together. One important grouse expressed by those who jettisoned the BJP in the state was there was not even one co-ordination meeting of the NDA since Modi became the prime minister.

Another important structural problem for the NDA in the state is that unlike in the 1998-99 period when it was headed by the AIADMK and in the 1999-2003 period by the DMK, this time the BJP has to deal with smaller parties like the DMDK, PMK, etc. The egos of these parties and their constant struggle to maintain their one-upmanship within the alliance has become a continuing headache.

The absence of strong local leaders like Jayalalithaa or Karunanidhi to keep the flock together is forcing the BJP to directly deal with its constituents and the end result is foregone.

During the Atal Bihari Vajpayee period, Tamil Nadu went to the assembly polls in 2001 May in which the BJP won four seats as part of the DMK alliance. Today it’s not clear whether the BJP will get even that number of seats in the elections because not only is there no credible NDA in the state, but also Modi is no Vajpayee.