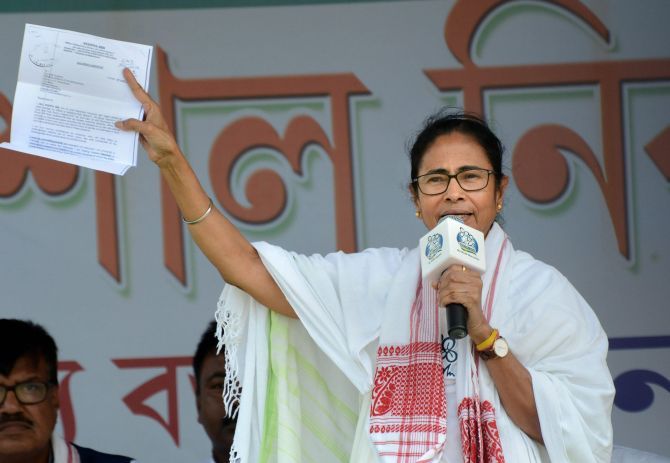 She wondered why PM Modi is not removing his own cabinet secretary or the Union home secretary, if he was so 'fond of making last-minute changes'.

"Why is the Centre intervening in state matters? Why was Andhra Pradesh chief secretary removed?" Banerjee, who has accused the Election Commission (EC) of working at the behest of the BJP, asked, addressing an election rally.

"Why don't you (Modi) remove your own cabinet secretary?" the CM said, claiming that she has worked with several prime ministers, but has never seen anyone as 'vindictive' like Modi.

Banerjee accused the Bharatiya Janata Party-led central government of using the income tax department and the Central Bureau of Investigation for raids and getting the institutions to do their bidding.

The letter said the removals were 'unfortunate, highly arbitrary, motivated and biased' and taken at the behest of the BJP, and urged the poll panel to review its decision.

Retorting to PM's claim that the Trinamool Congress chief was scared of him, Banerjee said it was actually Modi who was afraid of her, and not the other way round.

"The more you try to intimidate me, the more will I roar," she said, addressing two back-to-back rallies, a couple of hours after Modi's speech at Cooch Behar.

"Didi is not a person to be afraid of anything or anybody," the feisty TMC supremo, who almost single-handedly brought down the Communist Party of India (Marxist)-led Left Front in West Bengal, ending its 34-year rule, asserted.

Without naming former political associate Mukul Roy, whom she addressed as a 'traitor' for quitting her party to join the BJP, she accused Modi of sharing the dias at his public meeting in Cooch Behar with a person (Roy) accused in the Saradha and Narada cases.

"You (Modi) have said in Cooch Behar that you will seek answers for Saradha-Narada scams... It's your leader (Roy) who is accused in these and not the Trinamool," she said.

"Saradha scam happened during the CPI(M) rule, but you have made accusations against us (TMC) in 2014, 2016 and now again. Have you (Modi) been able to clean the Ganga at Varanasi, that you are looking at Bengal?" Banerjee asked, suggesting that BJP should try to save its citadel in Delhi.

Asserting that she is not perturbed at the removal of officers in the state, she said those who are afraid of losing elections indulge in such acts.

"The more they change our officers, the more we will win," she said.

Terming Modi as a "nakal chowkidar" (fake watchman), she said 'chowkidar jhuta jai, chowkidar lootera hai (watchman is liar, he is a thief)'.

On the Pulwama attack, the chief minister said the BJP is trying to politicise their martyrdom.

She also dared the saffron party to implement the National Register of Citizens (NRC) in West Bengal, asserting it will never be allowed in the state.

Claiming that North Bengal was neglected before the TMC came to power, she said the BJP comes like a cuckoo bird in the spring only during the elections.

"We are there with the people 365 days a year," Banerjee said, adding she visits North Bengal every month.

Accusing the BJP of engineering unrest in Darjeeling, where violent protests had jeopardised normal life, she said that those who created a rift between the people of the hills and the plains are now candidates of the saffron party.

The chief minister said that before her party was voted to power in the state, 400 hundred people used to get killed in the Maoist-affected 'Jangalmahal' every year.

"When peace prevails in the state, Modi and the BJP are trying to ignite unrest again. Where was Modi when Jangalmahal and Darjeeling were burning?" Banerjee asked, reiterating her recent jab -- 'Expiry Babu' -- at him.

Banerjee said that the PM has not given anything to Bengal. "Even the change of the state's name has not been sanctioned by the Centre."

"We have given rice to the poor people of the state for Rs two per kg, while the Modi government's actions caused job loss of two crore people in the country," she alleged.

She also accused the PM of allowing people who looted people's money to flee the country.

Banerjee said that the BJP government at the Centre had promised reopening of closed tea gardens in North Bengal, but has failed to do so, while she got a tea garden with 1,200 workers to start functioning again on Sunday.