The Congress, which had fought nine, lost all but managed to retain Kishanganj. Bihar got swept away by the "Modi tsunami" as the Bharatiya Janata Party made a clean sweep in the seats contested by it in the state while allies the Janata Dal-United and the Lok Janshakati Party, headed by chief minister Nitish Kumar and Ram Vilas Paswan respectively, too rode the tide and came out with stellar performances.

In a state where the total number of seats is 40, the BJP had fought 17 and emerged victorious in all of these while the JD-U which had contested as many, lost only the Muslim-dominated Kishanganj to the Congress.

The LJP struck gold, winning all the six seats it had contested, maintaining its tally of five years ago and improving on its strike rate compared with that of 2014 when it had fielded candidates in seven seats.

Return to the NDA also helped the JD-U, which had contested separately from the coalition in 2014, boost its tally from a dismal two seats five years ago.

The Congress, which had fought nine, lost all but managed to retain Kishanganj, which was won by late MP Asrarul Haque in 2014 and where Mohd Javed defeated JD-U by a margin of under 35,000 votes.

It was the worst-ever performance by the Grand Old Party in the state in decades.

Tariq Anwar, who quit the Nationalist Congress Party and returned to the party last year, lost Katihar to JD-U's Dulal Chand Goswami by over 55,000 votes.

Former Lok Sabha speaker Meira Kumar who had lost Sasaram to BJP's Chhedi Paswan five years ago, failed to wrest it back from the sitting MP who defeated her by 1.65 lakh votes.

The biggest setback, however, came for the seemingly formidable Rashtriya Janata Dal-- which led the opposition 'Mahagathbandhan' in the state -- had ruled Bihar for several years and at present has the largest number of legislators in the Vidhan Sabha.

The party fought 19 seats but scored a nought -- for the first time since it was founded by the then chief minister Lalu Prasad in 1997.

Prasad's daughter Misa Bharti failed to win Pataliputra in her second consecutive attempt as she lost to BJP's Ram Kripal Yadav -- a former aide of her father and now a Union minister -- by about 40,000 votes.

The RJD had given up its claim on Arrah in exchange for the CPI-ML's reciprocation in Pataliputra hoping that it would buttress Bharti's prospects.

Prasad himself had failed to win the seat in 2009 when he lost to another former aide Ranjan Yadav who was fielded by the JD-U.

Union minister Ravi Shankar Prasad made a spectacular Lok Sabha debut from Patna Sahib which he wrested from two-term MP Shatrughan Sinha, who quit the BJP and joined the Congress recently, defeating the immensely popular actor-turned-politician by about 2.85 lakh votes.

Union minister Giriraj Singh, who has courted controversies many a time by his hardline stance on Hindutva, ended up winning by one of the biggest margins in the state as he defeated CPI's Kanhaiya Kumar, in Begusarai, by 4.22 lakh votes.

The LJP founding president has announced that he would now seek entry into the Parliament through the Rajya Sabha. His son and heir apparent Chirag Paswan retained Jamui defeating RLSP's Bhudev Chaudhary by 2.41 lakh votes.

Rashtriya Lok Samta Party chief Upendra Kushwaha, who himself contested two out of the five seats allocated to his party in the Mahagathbandhan, lost his sitting seat of Karakat as well as Ujiyarpur.

Karakat was wrested back by JD-U's Mahabali Singh, the winner of 2009. Ujiyarpur was retained by state BJP president Nityanand Rai, who won by 2.77 lakh votes.

Veteran socialist leader Sharad Yadav, who had lost his pocket borough to RJD's Pappu Yadav in 2014 when he fought as a JD-U candidate, this time entered the fray as a candidate of Lalu Prasad's party and ended up losing by over three lakh votes to Dinesh Chandra Yadav of the JD-U, who is a minister in the state government.

Pappu Yadav, who fought on the ticket of his own outfit Jan Adhikar Party, ended up losing his deposit as he polled less than one lakh votes in a constituency where the total number of valid votes was in excess of 11 lakhs. 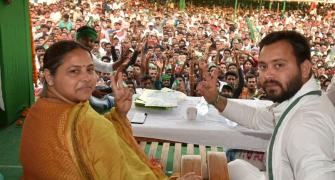 Caste out of Bihar equation as NDA wins state