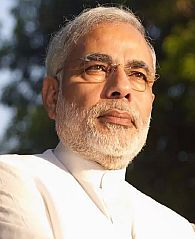 Politics came into play over the Uttarakhand floods as Narendra Modi ignored suggestions given by Home Minister Sushilkumar Shinde that chief ministers should not visit the flood-hit region as it hampers rescue operations.

The Gujarat Chief Minister on Saturday went around the flood-ravaged state to conduct an aerial survey of the damaged caused by the floods.

Apparently keeping in mind Modi's proposed visit, Shinde had said Chief Ministers, except that of Uttarakhand, should avoid going around the flood-affected areas because the administration would be distracted and it would hamper rescue work.

After the aerial survey, Modi said "I am acquainted with this region for long as I have worked here and because of that I could make out a lot through the aerial survey the scale of the tragedy, the lives of the pilgrims lost and their sufferings."

I am grateful and acknowledge their love and affection showered on the flood victims in this hour of crisis," Modi said.

Shinde also found BJP's demand for declaring the disaster as national calamity as one driven by politics.

"What is the gain in declaring it as a national calamity? It is a natural calamity and we are doing our best to tackle the disaster and allot the best resources for rescue and rehabilitation," Shinde said.