Modi takes a swipe at Naidu as TDP protests his visit

'He keeps reminding me he is senior. There is no debate in this. I have never shown any disrespect to you since you are a senior.'
'You are a senior in changing alliances. A senior biting the back of your own father-in-law. A senior in losing one election after the other, where as I am not.' 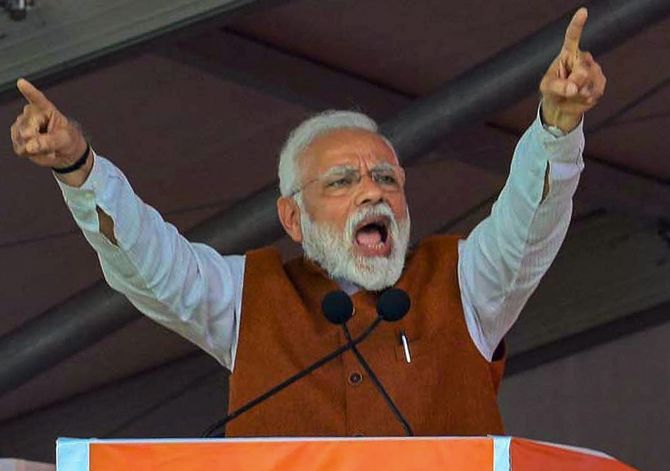 Prime Minister Narendra Modi on Sunday launched a scathing attack on Andhra Pradesh Chief Minister and Telugu Desam Party supremo Chandrababu Naidu, saying he has made a 'U-turn' on promises of development to the state and only trying to replicate National Democratic Alliance government's schemes.

"Our government gave to Andhra Pradesh much more than what was mentioned in special status. CM of Andhra Pradesh acknowledged this package but took a U-turn as they failed to use the funds in the appropriate way and were not able to develop the state," Modi said, addressing a public rally.

Modi lashed out at Naidu for aligning with the Congress, saying the former chief minister N T Rama Rao (NTR) had launched the party to make Andhra Pradesh 'Congress-mukt' after he was a victim of its 'arrogance.'

The prime minister said Naidu had been saying he was his senior and he had no problems with it.

"He keeps reminding me he is senior. There is no debate in this. I have never shown any disrespect to you since you are a senior.

"Babu garu is senior in jumping parties, senior in switching to new alliances and in backstabbing own father-in-law (NTR).

"He is a senior in losing every other election. He is a senior in sitting in the lap of the same person whom he criticises. He is senior in destroying the dreams of (people of) AP. I am certainly not a senior in that respect," Modi said, amid peals of laughter.

Modi, who was on his first visit to the state after the TDP walked out of the National Democratic Alliance government at the Centre in March last year, came down heavily on Naidu, whom he repeatedly referred to as 'father of N Lokesh'.

Modi alleged Naidu was taking him on since the Centre had sought details of every paise given to Andhra Pradesh.

Naidu had promised walking in the footsteps of NTR, Modi said and asked if the chief minister had lived by it.

"The TDP leader who has to resist the arrogance of the naamdaars (famous and powerful people) and crush their arrogance is siding with them," he said in an apparent swipe at Naidu joining hands with the Congress.

"This chowkidar (watchman) has disturbed his sleep.. wanted to know the details of every paise given to Andhra Pradesh," Modi said.

Naidu promised the sunrise of Andhra Pradesh but is fixated with the rise of his own son N Lokesh, Modi charged.

"Chandrababu Naidu rightly said that he is a 'wealth creator' and Modi has no idea about wealth creation. From Amaravati to Polavaram, they are busy in creating wealth for themselves and thats why are scared from this 'Chowkidar'.

"One must admire Chandrababu Naidu Garus honesty. He says he is a wealth creator! He’s obviously creating lots of wealth for him and his son while AP suffers."

The chief minister promised the redevelopment of Amaravati but is now engaged in his own development, the prime minister alleged.

He said Naidu had not initiated any new programmes for the poor but was only putting his stamp on the NDA government's development schemes.

Earlier, the Prime Minister dedicated two major petroleum and gas projects--a strategic petroleum reserve facility at Visakhapatnam and a gas field at Amalapuram worth Rs 6,825 crore to the nation through remote control system.

Modi said his government was working towards ensuring energy security for the country while simultaneously building a clean fuel economy.

He also laid the foundation-stone for the construction of a coastal terminal of Bharat Petroleum Corporation Limited at Krishnapatnam in SPS Nellore district.

During the rally, Modi said, "Our aim is to have a New India that is clean and pollution-free. Such projects are the key to the nations energy security."

The Centre was building oil reserves at various locations across the country to ensure there was no shortage of oil and gas in times of crises, he said, referring to a similar facility he inaugurated in the north-east on Saturday.

"Our government has been working continuously to make India a clean fuel economy and several projects have been initiated in this direction," he added.

Referring to the strategic petroleum reserve facility of Indian Strategic Petroleum Reserve Limited (ISPRL) at Visakhapatnam and the ONGCs Vasishta S1 gas field in the Krishna-Godavari Basin at Amalapuram, the Prime Minister said they would not only help create jobs but also aid in the development of gas-based industries in the region.

Giving the protocol a go-by, none of the state ministers turned up at the Gannavaram airport to formally receive the prime minister.

BJP leaders alleged that people were 'thwarted', from reaching the venue in large numbers and said countdown would start for Naidu with Modi's rally at Guntur.

Commenting on the black balloon protests against him by TDP workers, Modi quipped he welcomed it recalling the tradition of smearing black to ward off evil designs.

The ruling party organised protests in various cities and towns in the state Sunday in protest against Modi's visit.

At Vijayawada and Guntur, TDP workers donned black shirts and took out rallies demanding that 'Modi go back'.

In his daily teleconference with the party leaders, the chief minister dubbed Modi as the 'modati drohi' (first betrayer) of Andhra Pradesh.

"Modi is coming for a war on AP. They have done all injustice to the state, destroyed the systems and ruined the country.

"Modi is facing protests wherever he is going in the country. He has come to AP to mock at us," Naidu said.

Elaborate security arrangements had been made in and around the Gannavaram airport in the wake of the call given by the chief minister for protests against the prime minister's visit.

After the reception on the airport tarmac, the prime minister flew to Guntur by a special Indian Air Force helicopter.

Protests were also organised Saturday in some parts of the state against the visit.

Commenting on the black balloon protests against him by TDP workers, Modi quipped he welcomed it recalling the tradition of smearing black to ward off evil designs.

Modi said: "In the last four and a half years, whatever had to be done to ensure justice for my sisters and brothers of Andhra Pradesh, we have done. We stand with Andra Pradesh and its great people."

The Congress called for observance of black day on Sunday over Modi's 'failure' to honour the promises made to Andhra Pradesh post-bifurcation, party sources said.

Reports said similar protests were held in Kadapa and Kurnool districts as well. 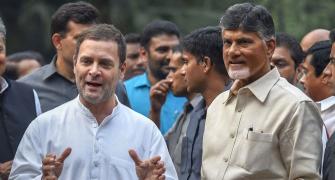 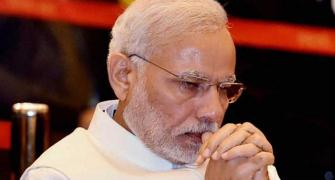