Congress leader Priyanka Gandhi Vadra met injured Jawaharlal Nehru University students at All India Institute of Medical Sciences on Sunday and alleged that it was "deeply sickening" about the government that allowed violence inflicted on students. 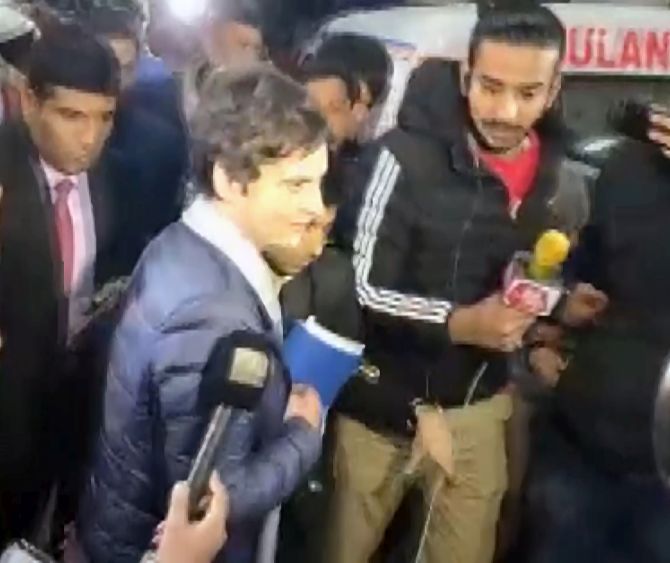 She alleged that "goons" of Prime Minister Narendra Modi and Union home minister Amit Shah were rampaging through universities' campuses and spreading fear among the students.

The Congress leader accused the Bharatiya Janata Party leaders of "pretending" before the media that it was not their "goons who unleashed violence" at the Jawaharlal Nehru University.

Priyanka Gandhi claimed that the wounded students at AIIMS told her that goons entered the campus and attacked them with sticks and other weapons, with many students having broken limbs and head injuries.

The Congress leader also alleged that a student told her that the police kicked him on the head several times.

"There is something deeply sickening about a government that allows and encourages such violence to be inflicted on their own children," Priyanka Gandhi tweeted.

"Wounded students at AIIMS trauma centre told me that goons entered the campus and attacked them with sticks and other weapons. Many had broken limbs and injuries on their heads. One student said the police kicked him several times on his head," she added.

Violence broke out at JNU on Sunday night as masked men armed with sticks attacked students and teachers and damaged property on the campus, prompting the administration to call in police which conducted a flag march.

At least 28 people, including JNU Students' Union president Aishe Ghosh, were injured and admitted to the All India Institute of Medical Sciences as chaos reigned on the campus for nearly two hours.

"India has an established global reputation as a liberal democracy. Now Modi-Shah's goons are rampaging through our universities, spreading fear among our children, who should be preparing for a better future," Priyanka Gandhi tweeted.

"To add insult to injury, BJP leaders are all over the media pretending that it wasn't their goons who unleashed this violence. The people are not deceived," she added.