The reshuffle could take place before the start of the winter session of Parliament.
Archis Mohan reports. 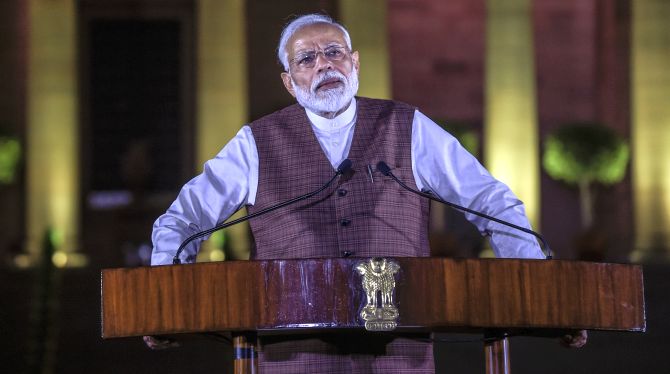 A reshuffle of portfolios as well as expansion of the Narendra Damodardas Modi-led Union council of ministers is on the anvil, particularly after demands from allies of the Bharatiya Janata Party, including the Janata Dal-United and Shiv Sena, that they be given 'respectable representation'.

According to sources, the reshuffle and expansion could take place close on the heels of the start of the winter session of Parliament. The session begins on November 18.

Apart from pressure from allies to find better representation, some ministers who were dropped from the council of ministers during the Modi government's first term could find their way back, and those handling more than one portfolio could have their burden lightened.

According to sources in the Nitish Kumar-led JD-U, the party has conveyed to the BJP leadership that it wants at least two Cabinet berths, one of those being the railway portfolio. Kumar wants that portfolio for his party's Rajya Sabha leader, former bureaucrat Ramchandra Prasad Singh.

After the Lok Sabha polls, the JD-U had wanted two Cabinet berths, but was snubbed, and was offered only one. It had then decided to not join the council of ministers.

On October 31, when Nitish Kumar was asked in Patna about Tyagi's comments, he said there was no question of the JD-U joining the Union Cabinet. Sources said Kumar's position was unlikely to change until the BJP relents and offered the JD-U 'suitable' representation.

The JD-U has 16 Lok Sabha MPs and 6 in the Rajya Sabha, with one Rajya Sabha vacancy in Bihar that is likely to go to the party.

Railway Minister Piyush Goyal, who also handles the commerce and industry portfolio, has mostly been unable to attend his office at Rail Bhavan in the national capital in the past month. Government sources said he has been busy negotiating the Regional Comprehensive Economic Partnership trade agreement.

JD-U sources said the BJP was amenable to listening to their demand on Cabinet representation with assembly polls in Bihar less than 12 months away, and the BJP's recent compulsions in accommodating allies in Haryana and Maharashtra.

In his first term in 2014, the PM had initially tried to conform to the BJP's manifesto promise of 'maximum governance, minimum government' to keep the size of council of ministers small.

The total number of ministers in the Union council of ministers cannot exceed 82, that is more than 15% of the strength of the Lok Sabha.