News
Business
Movies
Sports
Cricket
Get Ahead
Money Tips
Shopping
Sign in  |  Create a Rediffmail account
Rediff.com  » News » UN and New York, where leaders turn a blind eye to each other

UN and New York, where leaders turn a blind eye to each other 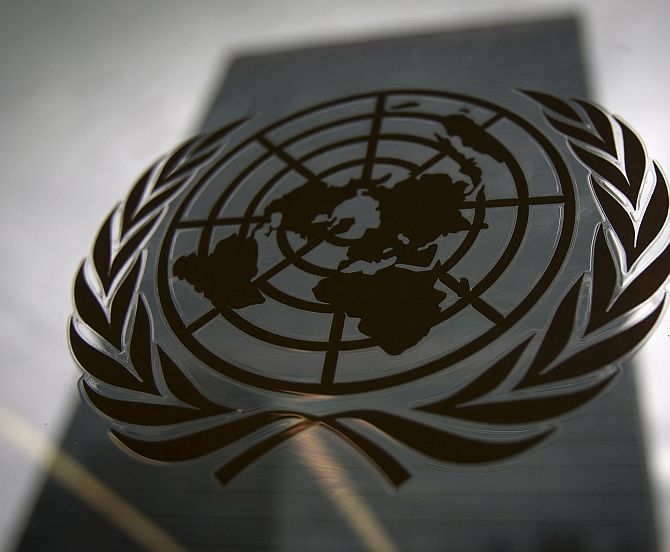 It is a city where the higher you live, the better it is, because, you avoid seeing the grime and smelling the stink. You also avoid other human beings.

Nawaz Sharif will be in town, but may not meet Narendra Modi.

Rahul Gandhi is around, but won't hang around the UN.

Several Indian business honchos are in the city to attend schmooze-fests, but are avoiding the media.

The Dalai Lama and the Pope are in the US, but will not meet each other.

Xi Jinping (Chinese President) is in town, but won't make a trip to Minnesota to meet the Dalai Lama.

The 70th general assembly of the United Nations begins on a note of despair, of a world haunted by conflicts and enormous humanitarian tragedies, and of leaders not living up to their role as leaders.

United Nations Secretary General Ban Ki-moon said "Turmoil -- because conflicts have deepened in so many places, and civilians are paying the price," but added "Hope -- because, a historic number of world leaders will gather in New York to forge solutions and adopt an inspiring new development agenda."

But, if you see media reports, you would wonder if anyone is really interested in the 'Sustainable Development Summit.'

Pakistan seems to have come with a single point agenda of raking up the Kashmir issue, India to showcase its CEOs and markets, China to shore up more influence in the world body and President Obama to leave his mark in the penultimate year of his second term.

The 2030 Agenda for Sustainable Development will need about three to five billion dollars annually, but with more and more countries lining up to dip into that pot, it doesn't look to be a happy situation.

At the Millennium Summit in 2000, world leaders had met up at the UN to reduce extreme poverty by 2015. But the world is nowhere near that goal. Rich countries are shying away from pledging money and poor countries are battling poverty and governance issues.

The statistics are mind boggling. In the past 30 years, while the global economy has grown by 380 percent, the number of people living in abject poverty has increased by more than 1.1 billion.

But check the media reports coming your way from New York. Almost every channel and newspaper is reporting on whether Prime Minister Modi and Prime Minister Nawaz Sharif would bump into each other in the corridors of the Waldorf Astoria in the next couple of days.

Not how the two countries are working towards reducing poverty and deprivation for their people.

The Indian delegation has studiously avoided talking about the P word or the K word. But that will happen. As a famous Indian diplomat once said. "It is Pakistan's annual itch" while referring to the annual exercise of raking up the Kashmir issue at the UN.

It truly is the 'silly season' in New York during the UNGA.

With 200 world leaders in New York and the arrival of the Pope also arriving in the city on Thursday, there is a VIP on every street corner, but nobody really knows what they are achieving.

Image: The United Nations headquarters building is pictured though a window with the UN logo in the foreground in the Manhattan borough of New York.
Photograph: Reuters