'In this case, because the Executive Branch has determined that Prime Minister Narendra Modi, as the sitting head of a foreign government, enjoys head of State immunity from the jurisdiction of US courts in light of his current status, Prime Minister Modi is entitled to immunity from the jurisdiction of this Court over this suit,' Preet Bharara's office told the New York court. 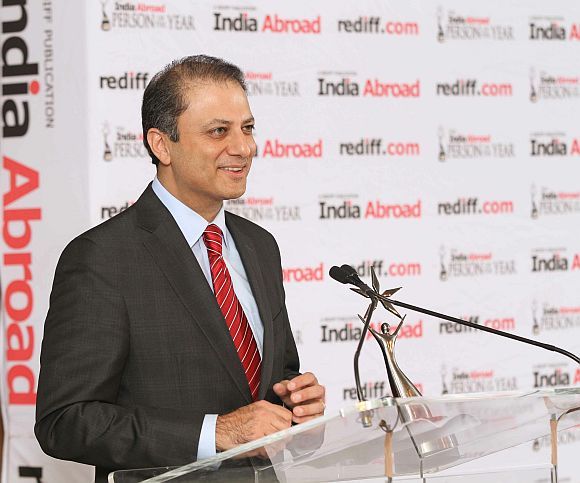 The office of the US Attorney for the Southern District of New York Preet Bharara on Sunday, October 19, in papers filed with the US District Court in Manhattan strongly argued in favour of immunity for Prime Mimister Narendra Modi in a pending lawsuit against Modi that has been brought by an organisation based in the United States.

In papers filed with the court, Bharara's office stated, 'Of the interest of the United States in the pending lawsuit against Prime Minister Narendra Modi, the sitting head of government of the Republic of India, and hereby informs the court that Prime Minister Modi is immune from this suit.'

Thus, this action by Bharara's office, categorically knocked down the false contention in some quarters in the Indian media that Bharara was behind the summons to Modi, which Justice Department sources had described as "ridiculous" and said the action by Bharara's office clearly proved that "the opposite is true," since it had submitted papers to the Manhattan District Court in favor of immunity for Modi.

On September 26, a senior White House official declared that the summons issued against Modi by a New York court on the eve of his arrival in the US, for his alleged role in the 2002 communal riots in Gujarat when he was the state's chief minister would have no effect at all because he enjoys full immunity as a visiting head of State.

The official, briefing reporters on background in a teleconference call, asked about the summons against Modi issued on September 25 by the US Federal Court for the Southern District of New York on a civil lawsuit filed by the New York-based American Justice Centre, a non-profit human rights organisation, along with two survivors of the post-Godhra violence, said, "We are aware from press reports of the lawsuit filed against Prime Minister Modi in the Federal District Court of New York," and that "while we cannot comment specifically on this lawsuit, I can tell you that as a general legal principle, sitting heads of government enjoy immunity from suits in American courts."

Obviously prepared for the question, the official went on to say that "sitting heads of government also enjoy personal inviolability while in the United States, which means they cannot be personally handed over or delivered papers or summons to begin the process of a lawsuit."

"In addition, as a matter of treaty, heads of delegations to the United Nations General Assembly enjoy immunity while in New York to attend UN events," the official said.

The court had said that Modi had to respond to the summons within 21 days after it was served on him.

Modi left for New Delhi on September 30 after he concluded his five-day US visit, which included participating in the UN General Assembly sessions, an address to the Indian-American community at Madison Square Garden, a White House summit with President Barack Obama, a meeting with the Congressional leadership on Capitol Hill in House Speaker John Boehner's chambers and dozens of other meetings and events.

The lawsuit against Modi had been filed under the Alien Tort Claims Act and the Torture Victim Protection Act. Seeking compensatory and punitive damages, the 28-page complaint charged Modi with committing crimes against humanity, extra-judicial killings, torture and inflicting mental and physical trauma on the victims, mostly from the Muslim community.

'The Tort case against Prime Minister Modi is an unequivocal message to human rights abusers everywhere,' said John Bradley, director, AJC. 'Time and place and the trappings of power will not be an impediment to justice,' he said.

The Alien Tort Claims Act, also known as the Alien Tort Statute, is a US federal law first adopted in 1789 that gives the federal courts jurisdiction to hear lawsuits filed by US residents for acts committed in violation of international law outside the US. 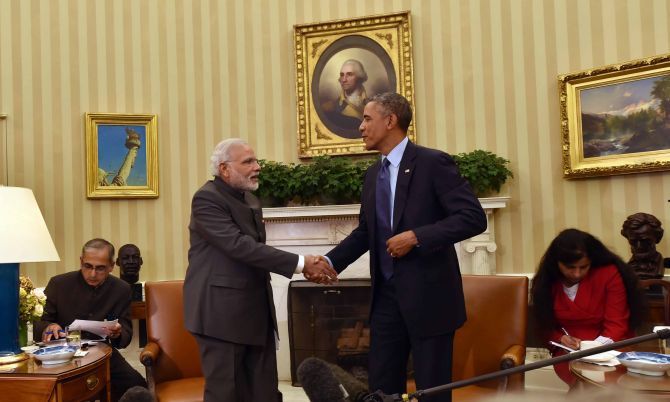 Bharara's filing with the court on Sunday which provided legal reinforcement to the assertions by the White House, said, 'In support of its interest and determination, the United States sets forth as follows: The United States has an interest in this action because Defendant Modi is the sitting head of a foreign government, thus raising the question of Prime Minister Modi's immunity from the court's jurisdiction while in office.'

It pointed out that 'the Constitution assigns to the US President alone the responsibility to represent the nation in its foreign relations. As an incident of that power, the Executive Branch has authority to determine the immunity from suit of sitting heads of government.'

'The interest of the United States in this matter arises from a determination by the Executive Branch of the Government of the United States, in consideration of the relevant principles of customary international law, and in the implementation of its foreign policy and in the conduct of its international relations, to recognise Prime Minister Modi's immunity from this suit while in office,' Bharara's office argued.

It went on to discuss in detail that 'this determination is controlling and is not subject to judicial review,' and noted that 'no court has ever subjected a sitting head of government to suit once the Executive Branch has determined that he or she is immune.'

Citing other precedents, Bharara's office said the courts had to accept the 'United States' suggestion that a foreign head of State is immune from suit -- even for acts committed prior to assuming office -- as a conclusive determination by the political arm of the Government that the continued (exercise of jurisdiction) interferes with the proper conduct of our foreign relations.'

Bharara's office cited precedents where the likes of then Israeli prime minister Ariel Sharon enjoyed such immunity and also determination of then British prime minister Margaret Thatcher's immunity was conclusive in dismissing a suit that alleged British complicity in US air strikes against Libya.

'In this case, because the Executive Branch has determined that Prime Minister Narendra Modi, as the sitting head of a foreign government, enjoys head of State immunity from the jurisdiction of US courts in light of his current status, Prime Minister Modi is entitled to immunity from the jurisdiction of this Court over this suit,' Bharara's office said, and concluded, 'For the foregoing reasons, the United States respectfully submits to the Court that Prime Minister Modi is immune in this action.'

Mary D McLeod, the acting legal adviser at the US State Department, in her letter to Acting Assistant Attorney General Joyce R Branda on September 30, 2014 -- the day of Modi's summit with Obama -- said the Government of India had asked the State Department 'to take the steps necessary to have this action (by the American Justice Center et al v Modi) against the Prime Minister dismissed on the basis of his immunity from jurisdiction as a sitting foreign head of government.'

She urged the Department of Justice to 'submit a suggestion of immunity to the district court at the earliest opportunity.'

McLeod said her letter 'recognises the particular importance attached by the United States to obtaining the prompt dismissal of the proceedings against the Prime Minister in view of the significant foreign policy implications of such an action.'

The Justice Department's acquiescence to the State Department's request through Bharara's office comes 19 days after Modi's departure from the United States, which was considered a huge success in several quarters.