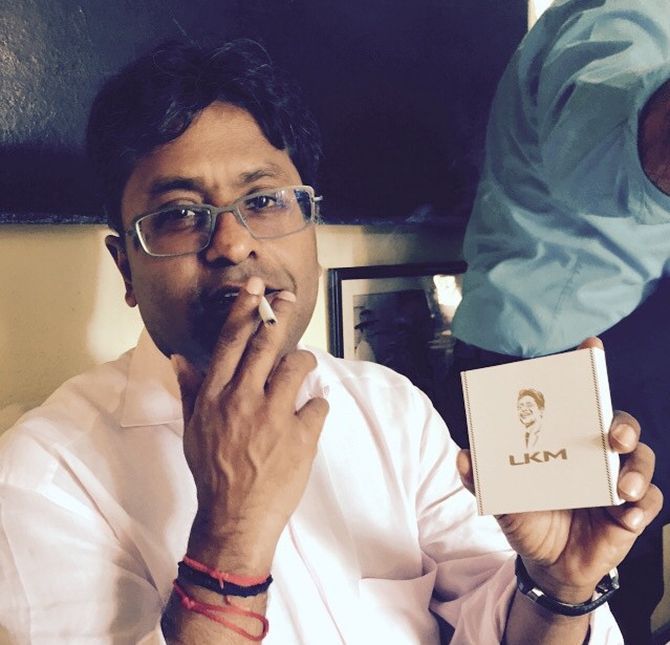 The Congress has asked Prime Minister Narendra Modi to take up the issue of former IPL chairman Lalit Modi's deportation during his ongoing visit to UK and to ensure that the "fugitive" and "black money exporter" is brought back.

Taking potshots at the prime minister, the Congress said this was the only visit where Modi can "fetch a lot for India in terms of concrete achievements".

If Modi does not bring him (Lalit Modi) back, people will believe that "big Modi is helping the little Modi", chief spokesperson of the party Randeep Surjewala said in New Delhi.

"Congress party hopes and demands that Prime Minister takes up the issue of deportation of Indian fugitive and black money exporter Lalit Modi with his counterpart in UK," he said.

Addressing a press conference at the Congress headquarters, Surjewala claimed that independent analysis show that Modi's 29 foreign visit have brought back little for the country "except selfies, photographs and promotion of Brand Modi".

He said Modi cannot hide behind technicalities of extradition law as the new Immigration Act of 2014 allows UK to deport any fugitive who is not its national.

"Prime Minister is well advised to ensure that Lalit Modi is immediately deported and hopefully brought back to India simultaneously when Narendra Modi comes back. Otherwise India will believe what it always suspects that big Modi is helping little Modi," he said.

He said the Prime Minister is "aware" that the "incessant lies" of his colleagues, Sushma Swaraj and Vasundhara Raje were with an aim to "protect" Lalit Modi have been exposed thoroughly.

"Arun Jaitley has only confounded the confusion. Even the Prime Minister himself can't make further excuses by hiding behind technicalities of extradition laws," he said.

The prime minister will be well advised to get Lalit Modi back and ensure that the forthcoming session of Parliament runs smoothly, Surjewala said.

"Any reneging on this front, will only go ahead to establish that, as we have been saying, in this entire murky game of ModiGate, Bada Modi is protecting Chhota Modi," the Congress spokesperson said.

Surjewala also waded into the One Rank One Pension scheme controversy saying that the protesting ex-servicemen have been protesting for 151 days.

"Ex-servicemen have returned and burnt 22,000 war medals till today and another 10,000 are being returned over next 24 hours," he said adding that Defence Minister Manohar Parrikar humiliated India's ex-servicemen by describing their conduct "as unlike of soldiers".

He said Modi has not found time to even meet and listen to their grievances.

"On the contrary, BJP government and Delhi police even tried to forcibly evict and humiliate ex-servicemen at Jantar Mantar on August, 14th, 2015. Nearly 30 lakh ex-servicemen are pained, appalled and anguished by the maltreatment and indifference of Modi government to their demands," he said.

Talking about the OROP notification of November 7, he said it has decimated all hopes of implementation of OROP acceptable to serving and retired soldiers of the three armed forces in India.

He quoted clause 4 of the notification which states that "Personnel who opt to get discharged henceforth on their own request under Rule 13(3)1(i) (b),13(3)1(iv) or Rule 16B of the Army Rule 1954 or equivalent Navy or Air Force Rules will not be entitled to the benefits of OROP".

He questioned if the BJP government was immune to the fact that almost all junior ranks, particularly jawans/junior commissioned officers retire by the age of 40 years.

"Only 30 per cent officers get selected as colonel. Majority of the remaining officers seek premature retirement on completion of 20 years of service. Number of personnel seeking premature retirement is also about 30-40 per cent. To deny benefit of OROP to all serving personnel of the three armed forces is a cruel injustice. It also artificially creates two classes within the armed forces -- one who retired before July, 1, 2014 who will get benefit of OROP and those retiring after July, 1, 2014 including all serving personnel of the three armed forces, who will not get benefit of OROP. It is neither logical nor just," he said.

Surjewala said Prime Minister celebrates Diwali with Army men but "commits gross injustice" with the same people on Diwali by "denying" them the benefit of OROP.

"Why has Modi government rejected the six demands of our 30 lakh ex-servicemen? Instead of back petting and chest thumping, why does the government not ponder over the unilateral rejection of OROP announcement by ex-servicemen," he questioned.

He wondered what is sacrosanct about July 1, 2014 for implementing OROP?

"Why is the government not implementing OROP rom April, 1, 2014 as decided by Congress-led UPA government? Why is Modi government denying benefit to ex-servicemen only by refusing to honour the date of implementation for OROP fixed by the Congress-led UPA," he questioned.

He asked why has the government put a conditionality of review of pension after five years and not two years as was being demanded by the veterans.

Surjewala said under formula of OROP decided by Congress party, our ex-servicemen would have got pension based on 'highest salary'.

"Under the current formula, pension would be decided based on the average of 'lowest and highest salary'. Why has the Modi government put our ex-serviceman at a disadvantage by this lopsided formula which will lead to disparity of pension amongst different pensioners," he said.

In the statement, he said BJP President Amit Shah "arrogantly" mocks at Congress Party for allocating an initial amount of Rs 500 crore by calling it a 'joke'.

"Does he not know that BJP's Finance and Defence Minister on July, 10, 2014 allocated only Rs 1,000 crore as OROP amount for the entire financial year 2014-15? Does it mean that BJP's Budget speech was a mere joke and an attempt to ridicule ex-servicemen?"