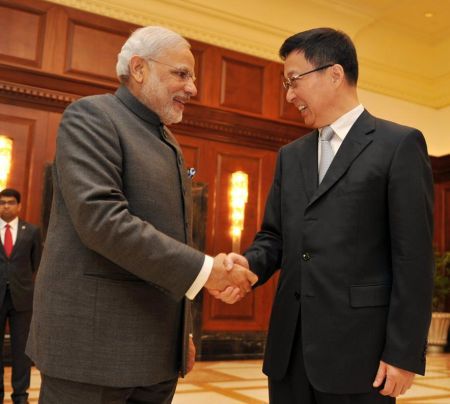 Prime Minister Narendra Modi was on Saturday treated to Shanghai vegetarian specials from stewed porcini to vegetable in curry sauce with rice at a lunch hosted by Communist Party chief of Shanghai Han Zheng.

“Shanghai vegetarian specials in honour of PM@narendramodi. Menu at Banquet hosted by Mr. Han Zheng,” external affairs ministry spokesperson Vikas Swarup tweeted along with a snapshot of the menu at the lunch.

Earlier, Modi also had a bilateral meeting with Han.

Modi, who began his visit from Xi’an on Thursday, was hosted by Chinese President Xi Jinping, who also held a banquet in the honour of the Indian leader.

Xi had also offered traditional Chinese delicacies like beancurd with mushroom and water chestnut in bean sauce during the fully-vegetarian banquet.

The dinner was followed by a colourful cultural event in the ancient city of Xi'an, which is also the hometown of President Xi.

This was a departure from protocol and was seen as a reciprocal gesture by the Chinese leader who was hosted by Modi in Ahmedabad when he visited India.