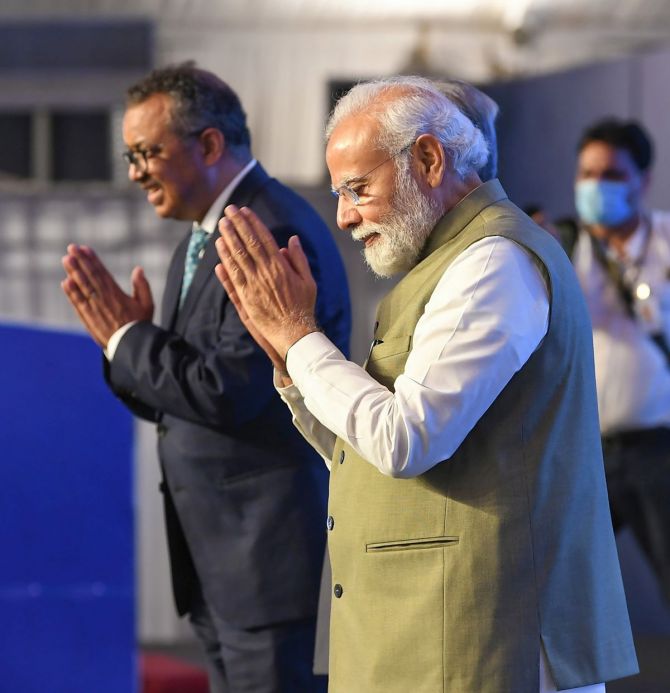 Dr Ghebreyesus reacted with laughter when Modi gave him a Gujarati name during a summit in Gandhinagar.

The Tulsi plant ('holy basil' or Ocimum tenuiflorum) has been an integral part of India's spiritual heritage, the prime minister said, speaking at the inaugural ceremony of the three-day Global Ayush Investment and Innovation Summit.

Dr Ghebreyesus, who shared the dais with Modi, had tried to start his speech in Gujarati.

"When he met me today morning, he said he has become a 'pucca' Gujarati. He asked me to give him a Gujarati name. He reminded me on the stage, whether I had decided on a name for him. In this pious land of Mahatma Gandhi, as a Gujarati, I would call my best friend (param mitra) 'Tulsibhai'," the prime minister said.

"Director-General of WHO Dr Tedros has been a very good friend (achhe mitra) of mine. Whenever we meet, he would always say one thing, 'Whatever I am today Modiji, is because of Indian teachers who taught me since childhood. Indian teachers have played a very big role at important junctures in my life, and I am proud to be associated with India'," Modi quoted Dr Ghebreyesus as stating.

The basil is traditionally planted in every household in India and prayers are offered to it generation after generation, Modi said.

"Tulsi is a plant which is an integral part of India's spiritual heritage," the prime minister said, noting that there is also a Tulsi Vivah festival around the time of Diwali.

The 'bhai' suffix, he said, is a must for a Gujarati. He was especially happy calling Dr Ghebreyesus 'Tulsibhai,' and delighted by the latter's affection for Gujarat, his attempt to speak in Gujarati and his affection for the Indian teachers who taught him in childhood, Modi added.

Notably, while Modi and Dr Ghebreyesus shared bonhomie on stage, the Indian government last week took objection to WHO's methodology for estimating COVID-19 mortality in the country, saying that its mathematical modelling was unsuitable for a vast country like India.