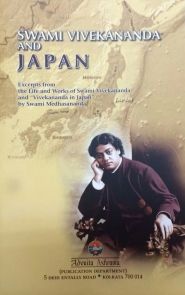 Warm vibes between Prime Minister Narendra Modi and his Japanese counterpart Shinzo Abe were at display on Saturday as the Indian leader arrived in Kyoto on five-day visit with an aim of raising the ties to a new level.

Modi, who has been "excited" about the visit, gifted books on Swami Vivekananda and a copy of Bhagawad Gita to Abe who made a special gesture of travelling to Kyoto specially to meet the Indian prime minister in this historic city before their formal Summit meeting in Tokyo on Monday.

Abe, who has said "India has special place in my heart", received Modi at the guest house soon after the Indian Prime Minister reached here after landing at airport in neighbouring Osaka and driving down a journey of about two hours.

Modi presented to Abe a special commemorative edition of 'Swami Vivekananda and Japan’- excerpts from the life and works of Swami Vivekanand and 'Vivekananda in Japan' by Swami Medhasananda' and a copy of the Bhagawada Gita.

In addition to the Sanskrit version, a Japanese version of the Bhagawad Gita was also presented to Abe. The two leaders also jointly participated in a Japanese ritual called 'feeding the fish', which is considered to be auspicious beginning. They went to a pond and gave the feed to the fish in it.

Abe then hosted a dinner for Modi.  Japanese Prime Minister will also treat Modi to special 'Chai' (tea) on Monday in Tokyo.

Ahead of the visit, the two prime ministers took to Twitter two days back to reach out to each other and the respective countries. While Modi tweeted in Japanese language to strike a chord with the Japanese people, Abe responded hours later by saying "India has a special place in my heart".

Modi had earlier said he was eagerly looking forward to meeting Abe whose leadership he "deeply respects". The prime minister will visit the famous Toji temple on Sunday. 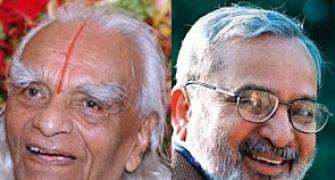 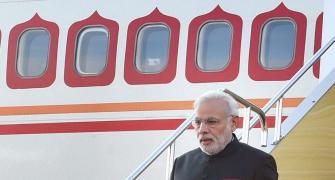 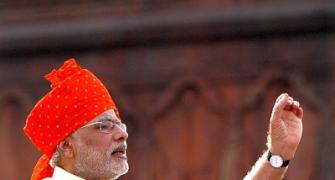 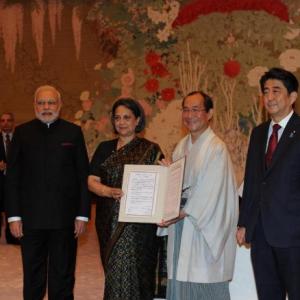