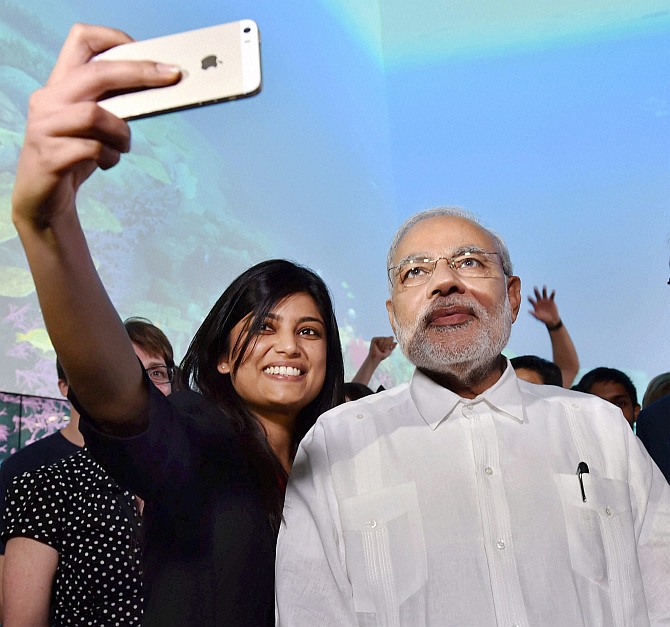 Prime Minister Narendra Modi poses for a photo with students during a visit to Queensland University of Technology in Brisbane, Australia. Photograph: Kamal Singh / PTI Photo

Prime Minister Narendra Modi on Friday wowed Queensland University of Technology students, freely mingling with them during a visit, and made it a point to tell them that it is Jawaharlal Nehru’s birthday as he sent his best wishes to children.

Within hours after his arrival following an overnight flight from Myanmar, Modi headed for the Queensland University of Technology for the first engagement of his five-day Australia visit, the first by an Indian PM in 28 years after Rajiv Gandhi.

“I wrote on the selfie with my young friends at QUT.. Today is 14th November. Pandit Nehru’s birthday. My good wishes to children,” Modi said in a tweet. Modi wrote in Gujarati.

The Prime Minister, wearing a a lab coat over a full sleeved white shirt and a beige coloured pant, said he is fortunate to be among children on the occasion of Nehru’s birthday.

Modi has been accused by Congress of ignoring the country's first Prime Minister and appropriating the legacy of freedom movement leaders like Mahatma Gandhi and Sardar Patel.

The PM, who is in Australia for the G20 summit starting Saturday and for bilateral talks with his Australian counterpart Tony Abbott next Tuesday in Canberra, was given a guided tour of the QUT campus and interacted with a group of selected students, some of whom were Indians.

Several students could not hide their enthusiasm and turned into shutterbugs as they relentlessly took photos. 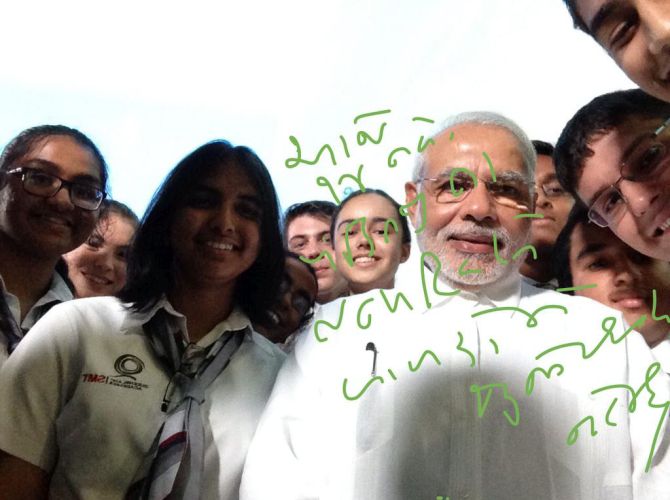 The enthusiastic response to Modi’s visit to QUT prompted a post on the University media’s Twitter handle –“Perhaps the most high-powered lecture QUT has hosted.”

Modi was also shown an agriculture robot ‘AgBot’ at the University's ‘The Cube’ complex -- the University’s Science and Engineering Centre -- developed under a joint bio-energy programme using agriculture waste.

The Agro Robot, developed as part of a programme to develop robotics technology in the agriculture sector, is a light weight machine that performs the functions of a large tractor, including weeding work.

“Research is key to development. There is ongoing relationship between development journey of humankind and research. Increasing dominance of science and technology in the field of agriculture will surely prove to be beneficial to farmers and to the field of agriculture as a whole. It is an important endeavor for welfare of mankind. Best wishes for your effort,” Modi wrote on the ‘AgBot’ in Gujarati.

“Narendra Modi is so popular even our AgBot wants an autograph," said a university tweet.