Prime Minister Narendra Modi on Wednesday became the first Indian premier to visit the Ram Janmabhoomi and the Hanumangarhi temple, according to a statement issued by the Uttar Pradesh government 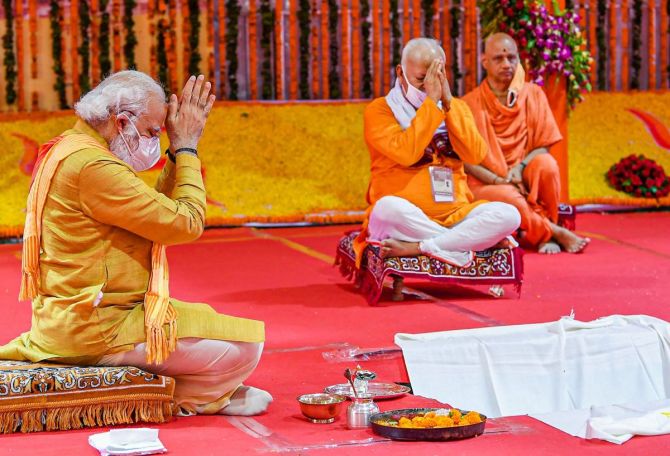 'Prime Minister Narendra Modi became the first prime minister to participate in the grand beginning of a temple, which symbolises conservation of the country's cultural heritage,' it added.

Modi began and concluded his speech on Wednesday at the Ram temple site in Ayodhya with chants of 'Siyavar Ramchandra ki Jai' and 'Jai Siya Ram', invoking both Lord Ram and goddess Sita, and said these slogans are resonating not only in this city but throughout the world.

"First, you all remember Lord Ram and Mother Sita and then I will proceed. Siyavar Ramchandra Ki Jai, Jai Siya Ram Jai Siya," he said while beginning his speech.

He said the call of 'Jai Siya Ram' is resonating not only in the city of Lord Ram but throughout the world today.

"I congratulate all citizens, Indian diaspora and devotees of Lord Ram across the globe on this pious occasion," he said.

While concluding, Modi said, "I pray to Lord Ram and Mother Janki to keep you all healthy and happy. May Mother Sita and Lord Ram always shower their blessings upon you."

Siya and Janki are among the several names of Sita.

The decades-long Ram Janmbhoomi movement was closely associated with the slogan of 'Jai Shri Ram' and it was used to galvanise people for the cause of building the Ram temple in Ayodhya.