"We are disciplined soldiers of the party," Modi said on party president answering all queries at the media interaction.

In his first appearance at a press conference since he came to power in 2014, Prime Minister Narendra Modi asserted in opening remarks that the Bharatiya Janata Party will come back to power with a full majority on its own, but refused to take any questions, citing party discipline.

In a surprised move, Modi showed up on the dais at the BJP headquarters for a scheduled press conference by party president Amit Shah, who gave a detailed report card on the performance of the National Democratic Alliance government as well as BJP's extensive electioneering.

After his opening remarks, Modi diverted questions by journalists, saying he will not answer because the press conference is being addressed by Shah, and in BJP's system, discipline has to be followed.

"We are disciplined soldiers of the party. The party president is everything for us," Modi said.

In his remarks, Modi said, "The election has been amazing (shandar). Elections were held in a positive spirit. A government with full majority will come back after remaining in power for five years . This is probably happening after a very long time. This is a big deal in itself."

'Our govt will come to power with absolute majority': PM Modi @ press conference

"The public has decided on the next government. We have promised many things in our manifesto to take the country forward. As soon as possible, the new government will take charge and we will take decisions one after another," Modi added.

In the press conference, Shah answered all questions and asserted that BJP will come back with a bigger majority.

"BJP will have enough seats to form a government on its own. We will get more than 300 seats. This election is to choose the country's Prime Minister. Narendra Modi will be the PM," said Shah.

There have been criticism against Modi including by Congress president Rahul Gandhi for not addressing any press conference since he became PM.

"It is not necessary that the PM responds to every question," said Shah, when a journalist asked him a question on the allegations against Modi and his silence on the Rafale deal.

Modi said India should impress the world with its diversity and democracy.

"I believe there are some things we can be proudly tell the world. This is the world's largest democracy, it is our responsibility to take the power of this democracy to the world. We should impress the world with the diversity of the democracy," he said.

He said there was a time when Indian Premier League had to be shifted out of India due to polls, but under the current government, Navratri, Ram Navami, Easter, Ramzan, IPL, board exams as well as elections could take place simultaneously and smoothly.

The prime minister said, during the campaigning, he told people that, "I have come to thank you for your blessings... The country has always been with us. So in a way the campaigning was a way of saying thank you to the people. Even today, I am here to thank you and thank them through you."

Modi said work to fulfil promises made in BJP's manifesto will be started as soon as the party comes to power.

"We ensured last-mile delivery which was a new structure of governance... Our government will take up its responsibility as soon as possible," he added.

The prime minister said the journey for an honest government started on May 17, 2014, a day after Lok Sabha election results were announced.

The PM also talked about BJP's meticulously plan for the election campaign. 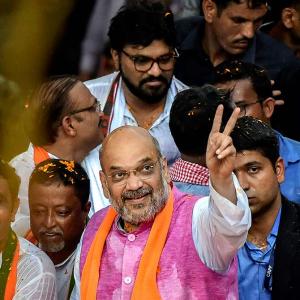